BOTH owners are optimistic about proceeding with the US$5 billion expansion of the Oyu Tolgoi Copper-Gold Project (OT) in southern Mongolia. This has seen the Government of Mongolia and Turquoise Hill Resources, which is majority owned by Rio Tinto, express hope that the expansion will start in 2014. 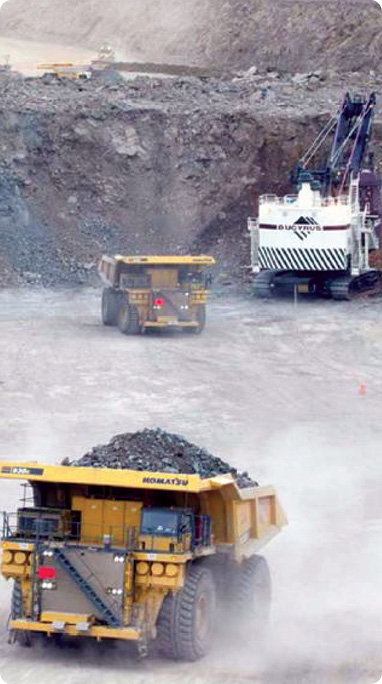 Open pit operations at the Oyu Tolgoi project, which is 80km north of the border between China and Mongolia.

A government source says the country is eager to forge ahead with OT and says it and Rio Tinto are working on an updated feasibility study. However, he says Rio Tinto may be reluctant to push on too quickly due to bleak market conditions with copper prices down more than 10% in 2013 and expected to drop further on new supplies from South America and Africa.

Copper shipments from the first phase of OT, the open pit, started in June, but Rio Tinto put plans to build an underground mine to access the richest parts of the deposit on hold in late July amid concerns by Mongolia that costs had spiralled out of control and that its interests had not been fully served.

Foreign investors are keeping a close eye on the way the government handles the project which is set to account for a third of its economy by 2020, as a key indicator of the country’s willingness to do business. This has already suffered a great deal in the past 12 months with foreign investors fleeing the country despite its prospectivity.

Oyu Tolgoi is 66%-owned by Turquoise Hill Resources unit with the government owing the remainder. Rio is building and operating the mine. Mongolia has complained that costs on the first phase were $2 billion higher than originally planned, and is looking for assurances that this will not happen during the second phase.

Rio Tinto’s new representative in Mongolia and chief executive of the OT project, Craig Kinnell says one of his four priorities is to prepare the project for future growth. “I am as expectant as everyone for the day that the issues under discussion will be resolved. But speed is not the measure of success.”

Turquoise Hill says there is positive engagement between the parties and progress is being made. It says all parties are working together to resolve remaining issues, including sharing of economic value, clarification of initial development and construction costs, access to water, and the timing, completion and Oyu Tolgoi LLC shareholder approval of the feasibility study for the expansion.

Given uncertainties surrounding the timing of resolution of issues the company says it is unable to complete project financing in 2013, however it remains committed to obtaining finance to fund the further development.