PUBLICLY listed PT J Resources Asia Pacific Tbk has secured US$275 million in loans from a syndication of local and foreign banks with which it intends to boost mining operations in Indonesia and Malaysia. The company aims to almost double annual gold production from 103,000 ounces to about 200,000 in 2014. 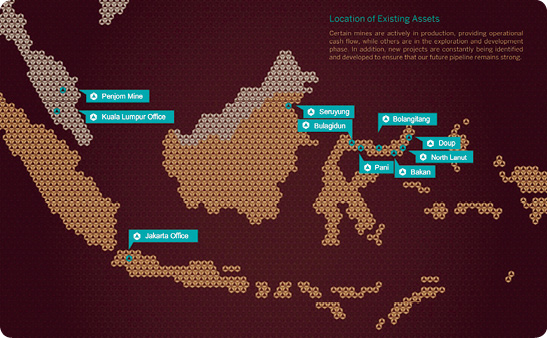 J Resources has a suite of operating, development and exploration gold projectsin Indonesia and Malaysia.

J Resources’ company director William Surnata says part of the loan funds would be used to support mining activities at the Penjom Gold Pine in Pahang, Malaysia, and develop new sites and facilities in Seruyung, East Kalimantan and in Bakan, North Sulawesi.

It aims to boost annual Penjom output to 66,000 ounces with the new investment.

The company acquired Penjom through intermediary PT J Resources Nusantara along with several assets in Indonesia from UK mining company Avocet Mining in 2011. The assets were placed directly under J Resources’ control early in 2012.

In the latter years of operation, Avocet did not invest significantly in Penjom, believing it would soon be exhausted. With the new mines, J Resources expected to have four active mines by the end of 2013, including North Lanut in North Sulawesi that can annually produce up to 40,000 ounces.

William Surnata says the company is also hoping to gain mining permits for two other new sites, which are expected to start producing in 2015. The new mines will be Daup and Pani, both in North Sulawesi. Daup has estimated reserves of 1.18 million ounces with Pani containing about 1.3 million ounces.

J Resources has a suite of operating, development and exploration gold projects in Indonesia and Malaysia.