HIGHLANDS Pacific has received encouraging nickel laterite assay results from reconnaissance exploration on its Sewa Bay tenements on Normanby Island at the southeast tip of PNG. Nickel laterites encountered have similarities to other ocean arc nickel deposits such as Kurumbakari (Ramu project) in PNG and other nickel projects in Philippines, Indonesia and New Caledonia. 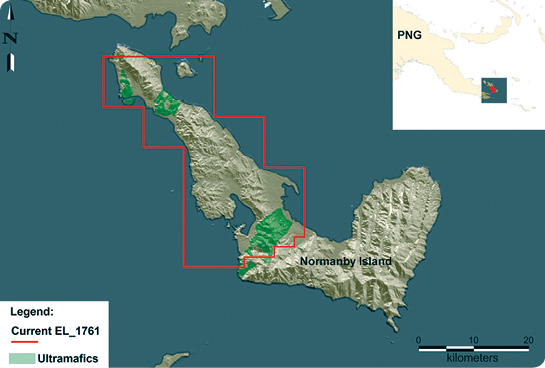 The Sewa Bay prospects of Highlands Pacific are on Normanby Island, off the southeast tip of Papua New Guinea.

Sewa Bay is about 400km from Port Moresby, 650km from Ramu’s Basamuk Process Plant at Madang and 1000km from Townsville, Australia. Highlands Pacific undertook a low-cost exploration program of 20 widely spaced hand auger holes drilled to refusal. Each hole was sampled on one metre intervals for a total of 41 samples. Holes drilled ranged between 0.6 to 3.0 metres in depth, with an average of 2.1 metres per drill hole.

Most soil samples showed elevated nickel grades indicative of laterite soils developed over ultramafic rocks with higher grades of greater than 0.6% nickel restricted to the south-eastern block. This is consistent with observations by previous field workers who had reported the occurrence of nickel laterite soils.

The reported grades are similar to those seen in the limonite portion of the Kurumbukari deposit that the Ramu project is mining. While these results are very preliminary they do indicate nickel‐cobalt laterite mineralization in the area at grades and thickness sufficient to warrant follow-up exploration.

The presence of previously reported magnesite occurrences was also confirmed. Further work will need to be carried out to assess the extent and tenure of these occurrences. Magnesite is a potential reagent in the treatment of laterite ores, where Ramu uses sodium hydroxide which it purchases from third parties.

Highlands Pacific managing director John Gooding says, “This was a low-cost exploration program that unearthed some encouraging results. We will sit back now and evaluate how to take this forward.

“Clearly we have an interest in the Ramu Nickel Project and the plant there is built and operating. However, Kurumbukari deposit is somewhat landlocked and specific for Ramu, whilst Sewa Bay’s proximity to the sea could make for an export or shipping opportunity. The first step though is to further evaluate the options for advancing exploration which could potentially be with a partner.”

The Ramu plant is operating at 50% capacity, up from the 40% production rates averaged during the September quarter. Ore mined during the September quarter was 907,000 wet tonnes and ore transported to the treatment plant via the 135km slurry pipeline was 310,000 dry tonnes. There were 7308 dry tonnes of mixed nickel cobalt hydroxide intermediate product produced containing about 2749 tonnes of nickel and 239 tonnes of cobalt. Seven shipments were made during the third quarter.

The Sewa Bay prospects of Highlands Pacific are on Normanby Island, off the southeast tip of Papua New Guinea.