An article looking at parallels between environmental regulation of deep sea mining and Deep Sea Tailings Placement (DSTP) in Papua New Guinea. It has been prepared by Dr Keri Wallace and Dr Tracy Shimmield of SAMS Research Services Ltd (SRSL).

THE Papua New Guinea Government is developing offshore mining legislation that will determine the regulation and policy necessary to administer deep sea mining prospects in PNG territorial waters. The key government aim is to mitigate and manage the environmental impacts of this new industry, so as to further develop the country’s mineral production. 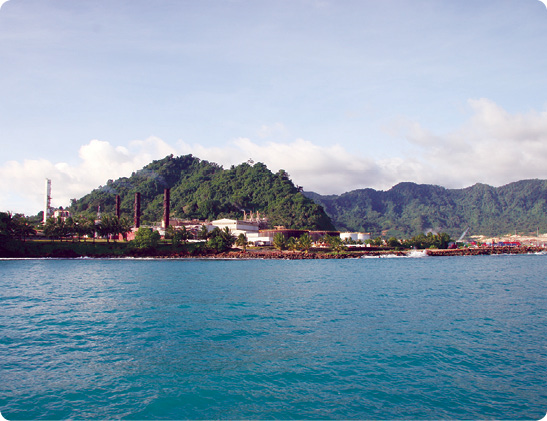 The Lihir mine is one of three mining operations in PNG currently using deep sea tailing placement and has been doing so since 1997. Photo courtesy SRSL.

This is important in a country where gold mining alone contributes a higher proportion to the country’s economy than it does in any other major mining country (15% GDP). Unlike terrestrial mining however, deep sea mining is novel and will inevitably bring controversy around the proper environmental regulation and management of such projects.

Solwara 1, an innovative deep sea project proposed to take place in PNG waters, is set to become the first large‐scale commercial project of its kind in the world. It is the brainchild of Canada‐based Nautilus Minerals, the first to explore the ocean floor for polymetallic seafloor massive sulphide deposits. The company was granted the first ever underwater mining lease for Solwara 1 in 2011. The project then entered two years of negotiations with the PNG Government, but it is expected that the company will soon be free to proceed with the pioneering development.

In order to be granted this first deep sea mining lease, a full Environmental Impact Assessment (EIA) with Environmental Management Plan (EMP) was conducted. Through surveys of baseline marine conditions and observed natural local sediment deposition (eg from volcanic eruptions), the resulting Environmental Impact Statement (EIS) claimed that ‘disturbance of the seafloor and the impacts of returning water and some entrained sediment to its area of origin is unlikely to be significant for the existing benthic ecology’.

Since there is no precedent for deep sea mining to date, the emphasis for such projects must be on thorough and meaningful environmental monitoring to ensure that the impacts do not exceed those proposed in the EIA. However, there are no specific guidelines in existence on how operational environmental monitoring should be conducted and regulated. In contrast, the now regulated process of deep sea tailings placement (DSTP) has been used as a waste management option for terrestrial mining in PNG for 20 years, with significant emphasis on environmental monitoring. Over the last 6 years the country has set global standards in best practice for assessing the impact of DSTP on the marine environment. It would seem sensible therefore, that the PNG Government and deep sea mining prospectors should benefit from the shared knowledge base, similar environmental impacts and mitigation options common to deep sea mining and DSTP.

“Although DSTP involves the input of material to the seabed, whereas deep sea mining is intended to extract material from it, both processes will inevitably result in large scale physical disturbance, sediment resuspension and smothering,” Dr Tracy Shimmield, SRSL.

DSTP is an alternative to land‐based mine‐waste disposal, whereby mineral ore is converted into slurry and transported via a pipeline to processing plants at the coast, with resultant waste being discharged into very deep water offshore. Specific topographical and hydrodynamic conditions must exist for the tailings to sink to the seabed and remain there. Compared to the capital and operational costs of on‐land impoundments, this type of tailings disposal can be very economical. Mines using DSTP in PNG are Lihir (1997), Simberi (2007) and Ramu (2012), while two mines propose to use DSTP in the near future - Yandera (2016) and Kula (2015).

DSTP is regulated under conditions of an environment permit issued under the Environment Act 2000. These permits require environmental management and monitoring programs for each project, which the company must submit for approval prior to start of construction and/or operation. Lessons learned from Misima and Lihir mines have been used by SRSL to develop best practice guidelines for the use of DSTP in PNG, which are now being adopted into regulation. Whilst these management tools are required, there is still a requirement for specific guidelines to be developed for each site to guide the company and regulator in management of the DSTP process.

“It is true that deep sea mining offers the opportunity to mine ores with significantly increased concentrations of target metals, while producing less waste. However, the extent of the impact of deep sea mining can only be known from long term and robust environmental monitoring plans. The ecological impacts on potentially vulnerable deep sea benthic communities are likely to be highly comparable to those of DSTP, and ongoing DSTP can act as a valuable analogue for the likely impacts of mining activities planned for the deep sea bed,” Dr Tracy Shimmield.

The process of DSTP has had a chequered past in PNG with scientific understanding and environmental regulation only now beginning to outpace the environmental impacts caused by poor industry practices in the past. It is vital therefore, that lessons learned from this process be used for the benefit of the deep sea mining industry in PNG and the protection of its marine environment.

The Lihir mine is one of three mining operations in PNG currently using deep sea tailing placement and has been doing so since 1997. Photo courtesy SRSL.