Marengo assured of funds for 2014


MARENGO Mining has agreed to a refinancing transaction with major shareholder Sentient Executive which will ensure financial support for operations at the Yandera Copper-Molybdenum-Gold Project through 2014. Sentient and its related entities hold 21.97% of Marengo, which would increase to 65.26% assuming conversion of all new debentures issued in connection with the refinancing. 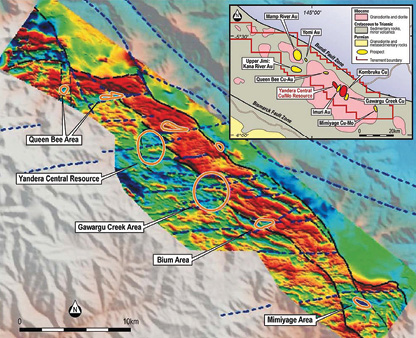 The Yandera project includes a number of deposits which Marengo Mining is exploring.

Sentient will also provide a letter of support to Marengo, confirming sufficient funds will be made available to maintain solvency for 12 months from the date of signing. Each US$1000 face value new debenture will be convertible, at the option of Sentient, into 50,000 common shares or chess depositary interests at Can$0.02 each.

Following a review of technical work in support of Yandera’s feasibility study, Marengo’s Board decided that additional work is required in a number of areas before a study can be prepared. This will include identifying an alternative cost-competitive source of power after Marengo’s preferred third party power provider withdrew from the proposed power supply arrangements.

Further opportunities to enhance the project, with the objective to help ensure it is robust at all phases of the commodity price cycle, include:

On October 15 the company announced it had entered into an MoU with Madang Development Corporation to cooperate in, and explore becoming an offtake party, in relation to a power supply solution for industrial and domestic electricity consumers in Madang province.

Exploration is ongoing and Marengo has recently received encouraging initial results from 2013 drilling targeting the near-surface Dimbi Zone within Yandera Central Porphyry System. A 2000 metre, 10-hole, diamond drilling campaign commenced at Dimbi in mid-September with the objective of identifying near-surface resources with potential to delineate a starter pit for the mining operation which could enhance the project.

Marengo’s president and CEO Les Emery says he is “pleased and encouraged by the early results from Dimbi, with the average grade being significantly above the current mineral resource grade. This is a significant result for Yandera, providing strong early encouragement that the current drilling campaign can outline an extensive near-surface zone of higher grade material at Dimbi - with important strategic implications for the overall Yandera development.”

The Yandera project includes a number of deposits which Marengo Mining is exploring.