PANAUST Limited has entered into a share sale and purchase agreement with a subsidiary of Glencore Xstrata to acquire Glencore’s 80% interest in the Frieda River Copper‐Gold Project by acquiring all shares held by Glencore in Xstrata Frieda River Limited (XFRL), a PNG registered company. PanAust has also agreed to take a 7.5% stake in Highlands Pacific, which has the minority interest in the project, by way of a placement. 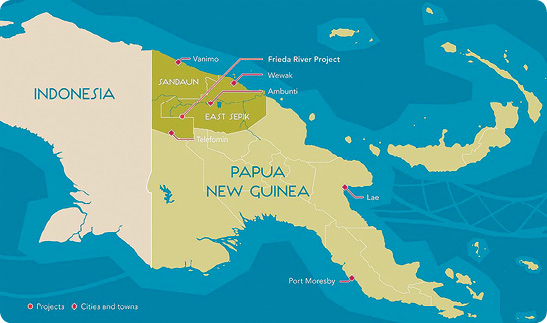 The Frieda River project is on the border of Sandaun (formerly West Sepik) and East Sepik provinces in northwest PNG.

Acquisition of the majority stake in Frieda River is consistent with PanAust’s strategy to ensure it has access to sufficient mineral resources to secure the company’s sustainable growth beyond the life of its Phu Kham Operation in Laos. The likely timing for implementation of PanAust’s development concept for Frieda River coincides with rising production levels scheduled for Phu Kham.

The initial consideration comprises US$75 million in two instalments. The first instalment will be US$25 million upon transaction close. The second instalment of US$50 million will be made on December 31, 2015. In addition, on successful completion of a development at Frieda River, Glencore will receive a 2% net smelter return royalty on PanAust’s interest in the project to a total aggregate amount of US$50 million.

Frieda River is one of the world’s largest undeveloped copper and gold deposits. It is about 200km from the northern coastline and 70km from the Sepik River. The most recent feasibility study considered development of a large-scale project, which had identified the need for large infrastructure development and complex material handling solutions which had rendered the project relatively expensive to develop. As part of its due diligence, PanAust completed a scoping study based on a smaller 24 million tonne/annum conventional open pit and flotation operation producing a copper-gold concentrate.

The study assumed mill feed sourced from Horse-Ivaal-Tukai (HIT) deposit of 430 million tonnes grading 0.54% copper and 0.3 grams/tonne gold, and provided average annual production of more than 100,000 tonnes of copper and 160,000 ounces of gold in concentrate.

The Frieda River project is on the border of Sandaun (formerly West Sepik) and East Sepik provinces in northwest PNG.