Conference focuses on mining in Sumatra


THE third edition of Sumatra Miner was held in Palembang, South Sumatra, on March 2 and 3. Almost 140 delegates were treated to a two-day conference of relevant industry content as well as an industry networking dinner hosted by Coal Club Indonesia. 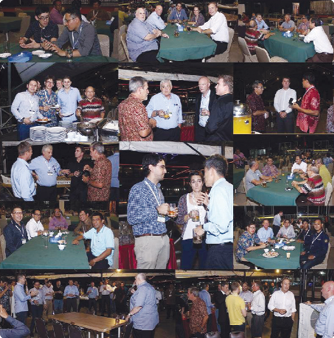 A Coal Club Indonesia networking function was held in conjunction with the Sumatra Miner conference in Palembang.

The conference brought together key industry players, producers, investors, solution providers, Government officials, mining associations, community representatives, consultancies, mining students and others to work through the challenges and opportunities the mining industry faces in Sumatra and further afield. It also looked at plans to provide more infrastructure in Sumatra to benefit the industry and the region’s economy.

The sponsors were G-Resources Martabe Gold Mine, Sumatra Copper & Gold, reswara, RoadTech and NAUE while the conference was organised by Mining Media International, publishers of The ASIA Miner and hosts of Coal Club Indonesia and Djakarta Mining Club.

There were 22 speakers from international, domestic and local companies along with regional and national government bodies. Among the topics covered were an overview of mining in Sumatra and current operations; exploration; government initiatives; improving productivity and efficiency; geosynthetics and potential liquefaction in mining; Indonesia’s power requirements; today’s market outlook including the challenges for the coal industry in Indonesia and globally; cost savings in challenging situations; and the challenges and opportunities for mining in Indonesia.

A number of participants passed on positive feedback from the event. PT Servita Beningdo’s Tony Ward said, “A valuable platform for networking and gaining insights into the mining industry, especially in Sumatra.” Royal Haskoning Indonesia’s Pramono Saleh said, “This conference can help participants to better understand the current mining conditions and subsequently how they should take steps to improve business.”

PT Bimatekno Karyatama Konsultan’s James Coup said, “More than met my expectations, the people attending were a good mix and the size of the group made discussion easier.” PT SMG Consultants’ David Wyllie said, “It was a great opportunity for networking and getting an update on the industry from a number of different perspectives.” SIGNTEGRA’s Wilham Louhenapessy said, “Very good for networking, friendship, fellowship and introduction of companies involved in the mining industry, especially in the Sumatra area. Brilliant!”