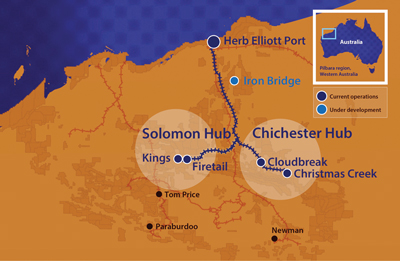 IN the wake of fresh concerns over the strength of the Chinese economy, the global iron ore price continues to spiral downwards from almost US$116 per tonne six months ago to just above $82, taking the bulk commodity to a new two-year low. Of the majors, Australia’s Fortescue Metals Group has performed poorly given the company’s sole exposure to iron ore.

Fortescue’s share price has plunged from above Aus$5 six months ago to around $3.50 today.

However, speaking at September’s International Mining and Resources Conference in Melbourne, Fortescue founder and chairman Andrew Forrest indicated that there was no long-term cause for concern.

“If you look at China’s overall economy, you still see it growing at about 6 to 7% and you recognize it’s nearly the size of North America’s economy … and we would be celebrating if China got anywhere near that,” he said. “You know I don’t think there’s any long term cause for concern.

“Monetarism is an important policy which the Chinese government pays more attention to than I think any other government in the world. They have all the challenge in trying to build an Australian-style urbanization each year. So you will not be surprised to hear they have challenges. But do they have very good management in place? I believe they do.

“We have a price to China which is in the same bracket as BHP and Rio Tinto and the very established producers – yet we’re a young producer – our production costs are coming down at a faster rate than any of the majors, as you’d expect from someone who’s just entered the industry, spent $20 billion getting into this very protected industry and now we’re beginning to extract benefits.”

He also hinted that Fortescue is considering opportunities to expand into other commodities and is willing to take equity in offshore gas operations as a cooperative approach with other companies.

“We’re not out there making or asking for decisions to be made in our favour, we’re simply saying: working with the companies which have [offshore gas fields] and working with the government, we’d be happy to give Fortescue’s best ability to develop assets for the people of Australia.”