Australia leading the world in the latest mineral resource statistics 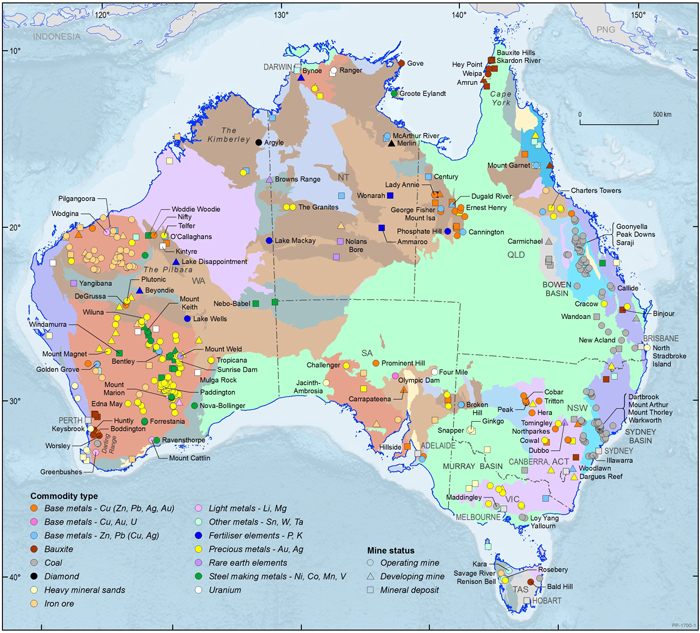 Speaking at the Prospectors and Developers Association of Canada (PDAC) Convention in Toronto, Minister for Resources and Northern Australia, Matt Canavan, announced that the new statistics show Australia has the world's largest identified resources of nine major mineral commodities.

AIMR 2017 includes assessments of reserves and resources at operating mines and other deposits, evaluations of long-term trends for major commodities, and comparative world rankings for mineral resources.

It shows that Australia's robust mining industry remains a world leader, keeping Australia as an attractive investment destination. We are in the top five in the world as a producer of 20 out of 34 important commodities, including gold, bauxite, iron ore, rare earths, mineral sands, zinc, lead and coal.

In 2016, Australia's mineral exports (excluding petroleum) amounted to a value of more than $151 billion. This was almost 46% of the value of all exported goods and services. In the 2016-17 financial year, mining accounted for 7.4% of Australia's gross domestic product.

As at December 2016, Australia had the highest Economic Demonstrated Resources in the world for gold, iron ore, lead, nickel, rutile, tantalum, uranium, zinc and zircon. In 2017, Australia had 301 operating mines.

Geoscience Australia and its predecessors have compiled a national inventory of mineral reserves and resource stocks annually since 1975.

“To ensure our diverse and plentiful mineral resources continue to be explored, the Australian Government has given Geoscience Australia $100.5 million to lead Exploring for the Future, a four-year program that aims to boost Australia's attractiveness as a destination for investment in resource exploration,” said Mr Canavan.

As part of Exploring for the Future, Geoscience Australia's leading researchers are using innovative techniques to gather new data and information, on an unprecedented scale, about the potential mineral, energy and groundwater resources in some of Australia's most underexplored areas.