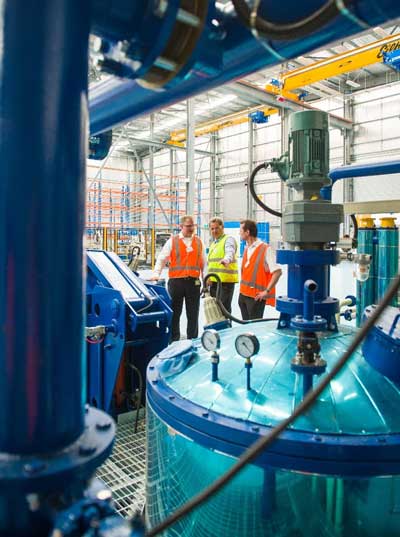 He said the centre “heralds a new era for hi-tech service. Industries such as mining and oil & gas that have made significant capital investments are now challenged with falling resource prices. At the same time the world is entering a new industrial era enabled by digitalisation.

“Now more than ever, it’s critical for companies to embrace hi-tech service to produce more at lower costs and avoid downtime that can cause losses and negatively impact company share prices. That’s why Siemens is pleased to be making this $20 million investment in WA,” he said.

“It’s about being competitive to secure your place in the global supply chain. Through modern technology and services, companies can achieve operational efficiencies, extend the life of their assets, optimise performance, reduce energy consumption and protect investments. Remote monitoring, predictive maintenance, simulation and cloud based asset management are just some of the new technologies and practises that operators can utilise.”

“Operational phases represent about 95% of the lifecycle costs – compared to just 5% or less in the capital investment phase, so hi-tech service becomes critical to drive increased overall equipment effectiveness while reducing these operational costs. For example, in Turkey’s state-run Tüpras refinery

Siemens succeeded in reducing the downtime of 1500 motors by a staggering 83%,” said Dr Thomas Moser.

The WA Department of Mines and Petroleum notes the value of resource projects under construction or in the committed stage is estimated at $171 billion and a further $110 billion is planned for the coming years. Siemens Australia CEO Jeff Connolly said the timing of the opening perfectly supported critical projects as they transitioned into operations such as Chevron’s Gorgon where the first LNG production was expected within the next few weeks.

“As the main motors and drives contractor for important infrastructure projects including some of WA’s biggest LNG projects, we take a long term view to the market and understand the importance of being there to support our customers over the operational life of the project as well,” he said. “Rapid developments in digitalisation mean that the future of service equates to the future of competition. Almost every modern piece of equipment now has the ability to capture data – it’s what you do with that data that matters!”