The deal marks a strategic step-up for both Manitowoc and Sin Heng, with Sin Heng already deploying eight Grove cranes as part of its own rental fleet in the rapidly developing South East Asian nation.

“Sin Heng has established a strong presence in Indonesia over the years, selling equipment and providing service to many industries including oil and gas, ship building and civil construction,” said Manitowoc VP and general manager Asia Pacific Raman Joshi. “Manitowoc sees tremendous synergy in this working partnership. Sin Heng Heavy Machinery is at a stage where it is primed for growth and we are confident in the company’s ability to deliver.”

Founded in 1969, Sin Heng Heavy Machinery has more than 45 years of experience in providing lifting solutions in industries comprising geotechnical infrastructure, construction, offshore and marine, as well as oil and gas. The company has been involved in many of Singapore’s landmark projects such as the Newton Circle Flyover, Benjamin Sheares Bridge, Marina Bay Sands Integrated Resort, Exxonmobil SPT Project, Google Data Centre Project and the Thomson MRT Line. 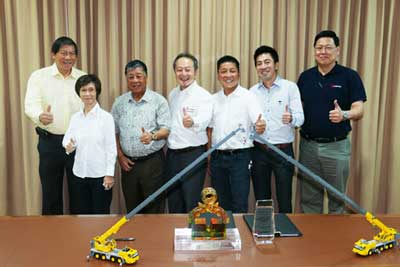 Sin Heng Heavy Machinery executive director Tan Cheng Guan said, “We are truly honoured and proud to be recognized as the official trading partner for this global crane manufacturer. Over the years, Manitowoc’s Grove brand has established itself as one of the most recognized and reliable names in the crane industry. This new partnership will further enhance our position as a leading crane distributor in Indonesia.”

Sin Heng’s Indonesian subsidiary, PT SH Machinery Indonesia, is working from a 3-storey office building in Kabupaten Tangerang but there are plans to further expand its facilities to maintain and stock equipment in anticipation of market demand for Grove cranes. At present, all Grove AT cranes sold in Indonesia are delivered directly to customers.

“Before we started selling Grove all-terrain (AT) cranes we looked at the repair costs for the cranes that we had operated previously in our rental fleet and we were pleasantly surprised at how low it was. We are focusing on Grove AT cranes for now, but we hope to expand our Grove crane offerings in the future as we continue to develop our partnership with Manitowoc Cranes,” said Tan Cheng Guan.