Thirty SDLG LG938L and LG958L wheel loaders are hard at work loading coal onto trains for up to 20 hours per day at Kakinada Port in India. Downtime is not an option despite the 40 degree C temperatures that’s why NC Enterprise relies on its fleet of SDLG units to keep things moving. 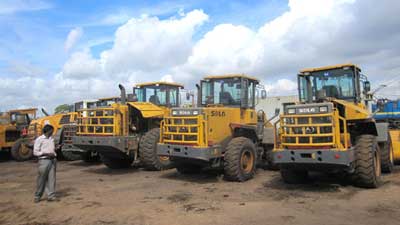 Located in Andhra Pradesh state, Kakinada Port, with an annual coal handling capacity of 14 million tonnes, is the principal intermediate port and safest harbour on the east coast of India. Through a commercial canal, imported commodities are transported from ship to shore on steel barges and once loaded onshore, are then transported via a single rail line from Kakinada Port to Samalkota, covering a total length of 126km.

The trains run to a strict schedule, so local coal handling specialist, NC Enterprise, has no time to waste in keeping operations moving. For this, the company’s general manager of operation, Siva Shankar, relies on a fleet of SDLG wheel loaders to get the job done.

“SDLG wheel loaders are well designed and easy to maintain,” explains Siva Shankar. “This, combined with their competitive price, made them an ideal solution for our jobsite.”

The fleet is a mixture of SDLG LG938L and LG958L wheel loaders, the most popular models in the Indian market. Both the 3-tonne LG938L and the 5-tonne LG958L feature powerful and efficient Deutz engines, delivering excellent efficiency and break-out force. The cabs are built to offer operators maximum visibility with wrap-around glass and air-conditioning to keep them cool. The machines also come with a two-year warranty.

“We purchased our first SDLG wheel loader almost five years ago and so far we have received dependable support from our local dealer – Detroit Mining and Construction Equipment,” adds Siva Shankar. “We have built a strong relationship and the good service that the salespeople and service technicians have delivered has led to our company purchasing more machines from them.”

Detroit Mining and Construction Equipment covers the Andhra Pradesh region, selling and supporting the SDLG range of products. Headquartered in Hyderabad, the company has branches throughout the region including Karnataka, Hospet, Chennai and Coimbatore. www.sdlg.com