One of the largest copper mines in Africa is increasing production at its open pit operation by employing a fleet of 200-tonne haul trucks with overhead trolley-assist specially designed for long, steep, uphill climb conditions. 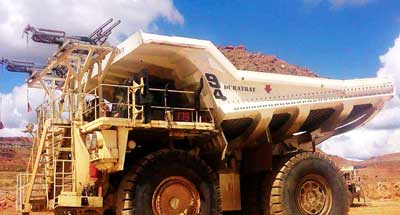 Among the fleet some Hitachi EH3500ACII trucks equipped with Duratray Suspended Dump Bodies (SDBs) have been recently commissioned.

The dump bodies commenced operation at the mine earlier this year as part of the mine’s goal of increasing production and expanding operations.

The new design of SDBs was purpose-built to suit the latest model of Hitachi haul truck with external overhead electrical power supply to augment power supplied to the electrical wheel motors by the vehicle’s on-board diesel engine and alternator.

By use of overhead electrical supply the truck has significantly higher speed for up-ramp climbs, as well as reduced fuel consumption and reduced wear on the diesel engine.

In addition to 12 conventional Duratray SDB’s already working on Hitachi EH3500ACII trucks, these are the first dump bodies developed by Duratray to work with trucks using the trolley-assist system.

Meantime, Duratray has also been involved in a product trial incorporating the development of a new application for the Suspended Dump Body (SDB) adapted to rail, called the DuraRail. This has been successfully tested in one of the most important iron ore mines in Canada.

Based on the achievements of 27 truck-mounted Duratrays at the same site, the first DuraRail prototype was developed as an opportunity to combine the suspended rubber system benefits into a tailored design suitable to fit onto haul trains and integrating a similar side-dumping mechanism of traditional steel ore wagons.

DuraRail consists of a flexible rubber wearmat anchored to the rail wagon walls allowing for efficiency when unloading due to the curved angles in the side corners, consistently eliminating carry-back or material hang ups.

Recently the engineering team on site met Duratray’s experts to discuss the performance progress of the prototype. A series of dimensional tests, connection into 20-car ore trains, evaluation and loading/unloading trials have been undertaken, delivering successful results compared to traditional wagons.