The new Caterpillar 16M3 Motor Grader features engineering enhancements that Cat says boost fuel economy, increase structural durability, simplify maintenance, add operator convenience and promote the safety of both the operator and those around the machine. The 16M3 is available in configurations to meet engine emissions standards worldwide. 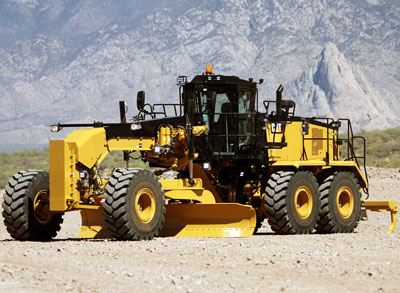 The 16M3 is an essential machine for building and maintaining mine haulage roads - to keep trucks running efficiently and at the lowest cost per tonne of material moved. The 16M3 has a 4.9-metre moldboard and an average operating weight of 32,411kg. The motor grader is optimally sized for operations using 136-tonne or smaller trucks.

A new ECO mode, standard for Tier 2 equivalent and Tier 4 engines, is designed to improve fuel economy by optimizing engine speed to 1900 rpm in working gears when possible with no compromise in performance. This operator-selected feature delivers fuel savings estimated to be as much as 4 to 5%, compared with working in comparable light to moderate load applications with the system deactivated. An additional engine control system feature provides consistent power to the ground by continually adjusting the engine to compensate for power losses to the cooling fan.

Also new for the 16M3 is the OK-to-Start system, which automatically checks the engine coolant, engine oil and hydraulic oil levels when the key is turned to the on position. The system also monitors these levels and the trans-axle oil level during operation, and it alerts the operator if levels drop too low.