MINCO Gold Corporation has completed the sale of its 51% undivided interest in the Changkeng Gold Project in southern China to Minco Silver Corporation. The transaction was approved by shareholders at the company’s Annual General and Special Meeting held on June 25, 2015. 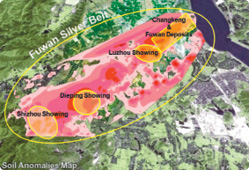 Minco Gold intends to use net proceeds of $10,019,397, after repayment of indebtedness owing to Minco Silver and certain closing adjustments, to pursue strategic mineral acquisitions, joint ventures or other transactions outside China.

Changkeng is contiguous to, and part of the same mineralized system, with Minco Silver’s flagship Fuwan project. This project includes a 51% interest in the silver mineralization within the Changkeng mineral exploration permit.

Changkeng falls into the broad category of sediment hosted epithermal deposits. The gold zone tends to pinch out toward the hinge of the syncline where it is replaced by silver mineralization at the Fuwan silver deposit.

Minco Resources also holds exploration permits in various other regions of China, including the Longnan project, Gold Bull Mountain project and Tugurige Gold Project. Minco Silver continues to hold, directly or indirectly, these other projects in trust for the benefit of Minco Gold.

Minco Gold is a Canadian mining company involved in the direct acquisition and development of high-grade, advanced stage gold properties. The company’s principal asset, excluding cash, is 11 million shares, or about 18.4%, of Minco Silver.

Minco Silver is a TSX and OTCQX listed company focusing on the acquisition and development of silver and gold mineral projects. The company owns a 90% interest in the Fuwan Silver Deposit, situated along the northeast margin of the highly prospective Fuwan Silver Belt in Guangdong Province.

Minco Silver says the acquisition allows it to have direct control of both the Fuwan silver and Changkeng gold projects. It intends to acquire a mining licence and develop the Fuwan and Changkeng projects together as one to significantly reduce capital and operating costs.