Production increases at CSH and Jiama


DOUBLING of mill processing capacity at China Gold International Resources Corp’s CSH Gold Project in Inner Mongolia is credited for an increase in gold production. During the March quarter of 2015 production increased 51% from 27,118 ounces in the corresponding quarter of 2014 to 41,033 ounces. 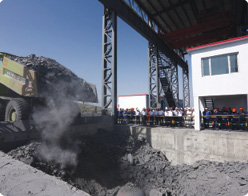 The first feed into the crushing system at CSH Gold Project in 2013.

Doubling of CSH capacity from 30,000 tonnes per day to 60,000 tonnes resulted in an increase in production primarily due to successful commissioning of the expansion program.

“Jiama expansion is progressing as anticipated and CSH is fully utilizing its increased capacity. At this stage, we are very confident about achieving our 2015 guidance.

“I am very pleased with the performance of our company and our team. Despite challenging market conditions, we grew revenues, net income and production. We are mindful of our capital and operating expenditures and are well financed to take advantage of any good acquisition opportunities which are becoming more re abundant.”