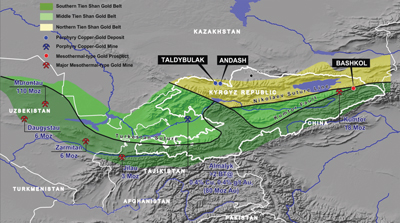 The Taldybulak and nearby Andash projects are in the Northern Tien Shan Gold Belt in the Kyrgyz Republic.

INITIAL results from a diamond drilling program at Tengri Resources’ Taldybulak Gold-Copper Project in the Talas exploration licence, Kyrgyz Republic, have confirmed the existence of a near-surface and higher grade gold system. The company commenced a 12-hole, 2000 metres diamond drilling program on August 1 following the signing of a 2-year access agreement with the local Talas community.

The program was designed to test the near-surface portion of a sheeted-vein system – a higher grade gold domain located within the deposit. This section of the system was not well drilled by previous operators and Tengri believes it may represent a significant opportunity to grow Taldybulak’s resource inventory and provide optionality around the development of the project if a near-surface, higher grade gold resource can be defined.

A low CAPEX mining operation at Taldybulak could benefit from potential development of Tengri’s Andash project and other nearby Talas Valley projects.

The mineralized zone remains open both deeper and at shallower depths. Preliminary laboratory tests demonstrate the occurrence of coarse gold, which might be efficiently recovered in a simple gravity separation circuit.

Taldybulak is believed to be one of the largest and most promising copper-gold deposits in the Kyrgyz Republic and is therefore an important mid to long term growth development opportunity. It hosts an indicated 116.5 million tonnes for 2.3 million ounces of gold and 488 million pounds of copper, and 336.2 million inferred tonnes for 4.5 million gold ounces and 1.178 billion copper pounds. These resources have been estimated by Goldfields under the South African Code for the Reporting of Exploration Results, Mineral Resources and Mineral Reserves.

Securing the community access agreement is a significant milestone for Tengri and is the result of extensive consultation with the Aral Village Rural Council. As part of that agreement, Tengri will establish a social development fund aimed at improving the standard of living and skill sets of the Aral community.

Tengri’s executive director Gary Lewis says, “The Taldybulak deposit is a very exciting asset for Tengri as we work to unlock the development potential of the broader Talas region. Tengri will continue to prioritize investing in exploration during the summer period with drilling campaigns under way at the 17,986 Bashkol project and now Taldybulak. Collectively, the 4000 metres of drilling should unlock additional value at both projects.

“We are also continuing to assess other development opportunities, both across the company’s project portfolio and more broadly within Central Asia.”