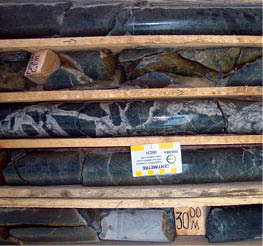 ERDENE Resource Development Corp is preparing for the next exploration phase at the Altan Nar (Golden Sun) project. The program is expected to begin during the third quarter and will include delineation and exploration drilling, trenching and expanded geotechnical surveys.

Erdene’s technical group has compiled, reviewed and interpreted results of the second quarter 2014 program which have been incorporated in the design of the next exploration phase. The company hopes the next phase during the remainder of 2014 will enable it to establish a maiden NI43-101 compliant resource and to identify further gold, silver, lead and zinc mineralization amenable to open pit development.

During the second quarter, the company reported its best results to date from drilling at Altan Nar. These included the highest grade gold interval drilled at the project with 17.7 grams/tonne gold over 5 metres, within 19 metres @ 5.8 grams/tonne gold, 37 grams/tonne silver and 2.49% combined lead and zinc, intersected in the Discovery Zone (DZ), and up to 24 metres exceeding 2 grams/tonne gold at the Union North target, more than 1km north of the DZ.

These near-surface mineralized zones have also been exposed at surface through trenching. The DZ strike length was extended to 450 metres and is still open to the northeast and at depth where drilling returned 6 metres @ 4.8 grams/tonne gold from 235 metres. Union North has been tested over a 150 metre strike length through trenching and drilling, and remains open in all directions.

Results from this program support the continued expansion of the gold-polymetallic mineralization within the 5.6km by 1.5km target area at Altan Nar and has resulted in improved definition of 12 highly prospective targets. Two of these targets, DZ and Union North, have been shown to host significant near-surface mineralization while the remaining 10 targets are relatively untested by trenching and drilling.

2014 exploration at the Khuvyn Khar copper project, 40km east of Altan Nar, has included field evaluation of the seven porphyry copper drill targets identified during the 2013 program and geophysical characterization studies of drill core to provide further definition and confidence in the modelling of potential mineralization.

Geochemical rock chip sampling, vein density mapping and geophysical modelling has resulted in the identification of new, partially buried targets in the western and central portion of the Khuvyn Khar target area. Plans are being developed for additional work. The ongoing exploration program continues to confirm the potential for copper-rich porphyry-style mineralization.