DURING the past year Wesizwe Platinum’s flagship Bakubung Platinum Mine project, which is being developed in the northern section of the western limb of northwest South Africa’s Bushveld Complex, has proven itself to be a successful example of Chinese/South African partnership in action in the country. Wesizwe Platinum’s strategic partners are the Chinese mining group Jinchuan and CADFund – the China/Africa Development Fund. 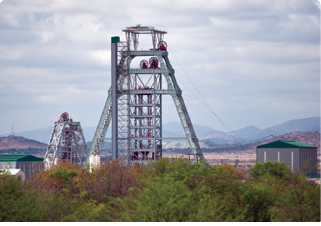 Bakubung Platinum Mine in South Africa is being developed by Wesizwe Platinum with the assistance of Chinese mining group Jinchuan and the China/Africa Development Fund.

As South Africa looks to maximize its economic relationship with fellow BRICS member countries in this increasingly influential grouping of nations, the Wesizwe Bakubung development signals good news for future business development prospects with China. In January 2013, Wesizwe announced the approval of the China Development Bank’s US$650 million loan facility for the project. As part of this funding, Wesizwe obtained two bridging loan facilities of US$100 million each. Wesizwe plans to finalize all terms and conditions of the US$650 million project funding before the end of the current financial year.

From a strategic perspective, Wesizwe is focused on PGM and strategic metals which are defined as having high value combined with long-term demand, which will complement the company’s PGM production. Wesizwe’s objective is to build a world-class platinum group metals mine at its anchor project, the Bakubung Platinum Mine.

In addition, the company is evaluating potential infrastructure synergies with the group’s neighbours on the Bushveld Complex. The realization of these synergies would significantly reduce investment expenditure, which would in turn improve the net present value (NPV) of the project. Wesizwe also plans to invest where it has operational control and the opportunity to move down the value chain.

The immediate focus is on development of the Bakubung Platinum Mine, but the long-term focus is on Africa with any future mineral property acquisition based on risk, reward, cost, value and timing of the opportunity. The company also looks to grow by leveraging the global expertise of its Chinese partners and exploit vertical integration where appropriate.

In terms of progress being made at the Bakubung Platinum Mine project, much has been achieved over the past year and the mine is expected to initiate production ramp-up early in 2018, on target. The project is already 14% complete, with the current depth of the mine shaft standing at 290.2 metres and the depth of the ventilation shaft is 439.1 metres. At a steady state, the mine will produce 350,000 ounces of 4E platinum group metals.

Since the beginning of the year, the project has seen the successful conversion from pre-sink to slow sinking on the 8.5 metre diameter main shaft. The main shaft headgear, winder-house and winders were also commissioned during this period. Slow sink was started at a depth of 120 metres below collar and commenced in July 2013, approximately two weeks ahead of schedule. All shaft bank steel work and services were commissioned at the same time, with the 4-gate ventilation system extended to the face to provide sufficient ventilation for operations.

The ventilation shaft headgear was commissioned in January 2013, followed the next month by commissioning of the stage and kibble winders, and the slow sink of the ventilation shaft officially commenced on March 22. These are all major milestones achieved against the project development schedule.

Such demonstrable progress at the Bakubung Platinum Mine represents not only good news for Wesizwe’s shareholders, but also for the local community located close to the mine site which is looking to such projects to stimulate further economic development and job opportunities in the future.

Maintaining good stakeholder relations and ensuring proactive, ongoing communications and engagement with all the individual stakeholder groups in the local community that are critical to the success of the Bakubung Platinum Mine, is a strategic priority for the company.

As part of the company’s Social Labour Plan (SLP) commitments, Wesizwe is working to improve both local infrastructure and access to education, vocational training and specialist skills development. The past year has proved to be busy for Wesizwe in terms of implementing a wide range of local SLP development projects for the benefit of local residents, signifying that the Bakubung Platinum Mine project is a win-win scenario for Wesizwe Platinum, the local community and its Chinese strategic partners.