AUSTRALIA is the world’s most attractive country for mining investment, according to the annual survey of mining executives released by independent Canadian policy think-tank, the Fraser Institute. In terms of regions, Western Australia was number one after dropping to fourth in 2014 while Northern Territory was seventh and South Australia tenth.

The annual survey rates 109 jurisdictions around the world based on geologic attractiveness and the extent government policies encourage or deter exploration and investment. The institute surveyed around 4000 mining companies to gauge their views.

In addition to being blessed with an abundance of mineral potential, miners give Western Australia’s government credit for having transparent mining policies, a strong legal system, clear regulations and skilled labour force.

Canada and the US also fare prominently in this year’s survey. Saskatchewan is the top-ranked Canadian province at second overall while Nevada is the top US state placing third. Five out of the top 10 worldwide jurisdictions are in North America with Alaska at six, Quebec eight and Utah nine. Two European jurisdictions complete the top 10 list - Ireland at four and Finland at five. 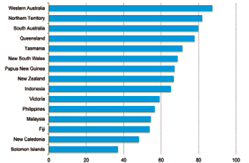 The Fraser Institute’s Investment Attractive Index for Australia and Oceania.

“Caution needs to be taken when considering the Investment Attractiveness Index as it is a composite index that combines both the Policy Perception Index and results from the Best Practices Mineral Potential Index.

“Most Australian jurisdictions ranked lower on the Policy Perception Index indicating that their mineral potential – which receives a higher weighting in the calculation – increases their overall investment attractiveness. This is important to consider as there is still much more to be done to reduce the regulatory burden, duplications and processing delays.

“New South Wales was the lowest ranked Australian jurisdiction on the Policy Perception Index at 51 behind Victoria at 43.

“Comments from survey participants highlighted the need for improvements in some Australian jurisdictions, especially in New South Wales with regards to approval timeframes and in Queensland with regards to land access and workplace relations. While Australia as a whole is on top of the world for investment attractiveness, more can be done at the Federal, State and Territory levels to increase mineral exploration and reduce the operating cost environment.

“Making the overall development approvals process through the many government departments more efficient and effective would go a long way to improving both of these objectives.

“The announcement by the Queensland Government that eligible mineral explorers will be able to reduce their exploration permit expenditure requirements by up to 50% over the next two years is positive. AMEC is seeking similar flexibility and concessions in other jurisdictions.

“Continuation of the various state and territory co-funded drilling programs is another positive initiative and should be fully supported, as is pre-competitive geoscience data. These will promote more exploration.

The Investment Attractive Index for Asia.
“The first round of the Federal Government’s Exploration Development Incentive (EDI) saw 84 Australian companies receiving a share of $21 million to distribute to their shareholders in the form of a direct tax offset. The EDI has two more years to run and will further increase greenfield exploration which is essential to make new discoveries that will become the mines of tomorrow to provide jobs and Government revenue streams for the future,” said Simon Bennison.