POSITIVE indications from the logging of core from a three hole diamond drilling program at ECR Minerals’ Itogon Gold Project have prompted the company to extend the program by drilling a further hole. The fourth hole was more than 75% complete by mid-March. 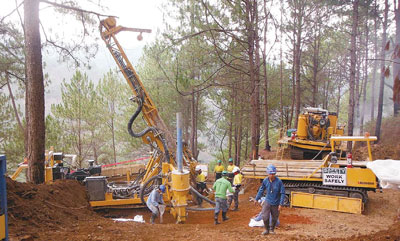 Drilling by ECR Minerals at the Itogon Gold Project.

ECR is the operator of the Itogon project and has the right to earn a 50% interest therein. The project is in a gold and copper mining district in the north of the Philippines.

The company began its latest campaign on January 22 and positive logging indications were received from the second hole which prompted ECR to design a fourth hole.

Following completion of this hole, the drill rig will be moved to the site of a drill pad used during ECR’s first drilling campaign at Itogon in April 2014. It is planned that the rig will attempt to extend that hole and intercept a structure which was intersected at depth by the second hole in the latest campaign and which is thought to be of geological significance.

Excluding the fourth hole with a target depth of 120 metres, 439.5 metres was drilled in the latest program and the company remained well within its budgeted number of metres for the program, which was 990 metres. Core samples from the three earlier holes were dispatched to the company’s chosen independent laboratory, Intertek Testing Services Philippines.

Decisions regarding any further drilling in the current program will be made on the basis of evolving geological interpretations and assay results as they become available.

A vein striking approximately northwest and dipping approximately 45 degrees to the southwest was exposed in preparation of the drill pad for the second hole in the latest program. The vein was sampled over 10 metres of strike using six 1 metres channel samples, each 2 metres apart. The directors of ECR consider the grades to be encouraging.

ECR’s drilling to date has confirmed mineralization over a strike length of 400 metres and a vertical extent of 250 metres, open along strike and down dip. The width of the overall mineralized zone at surface, demonstrated by channel sampling, is up to 250 metres.