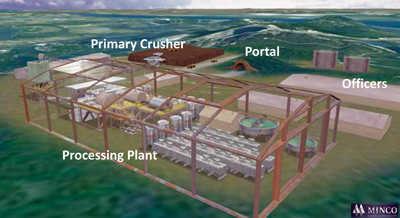 MINCO Silver is continuing efforts to obtain environmental approval and permitting before seeking a mining licence for Fuwan Silver Project in Guangdong Province. As part of this process the company’s Chinese subsidiary Foshan Minco hosted a site visit for officers from Guangdong Environment Protection Administration (EPA) and has had continuous discussions on the EIA approval with various government agencies.

Minco has decided not to renew a third permit, Guanhuatang, due to its proximity to new town developments and reservoirs.

During 2013, the company made great efforts to regain the support of local communities and had productive communication with Zhaoqian District government and Gaoyao County government before submission of the revised EIA report to Guangdong EPA department. Due to the fact that the last public opinion survey was carried out in 2008, the company conducted a new survey concerning the project and obtained very strong support from locals. On May 26, 2013, Gaoyao County government issued an official approval.

In 2010 the company engaged Guangdong Nuclear Design Institute to complete the Chinese Regulatory EIA report. This was reviewed and approved by a technical panel appointed by the Department of Environmental Protection Administration of Guangdong in principle on March 7, 2010 with certain comments. The company submitted the revised report in December 2010 after addressing the comments received from the panel.

The company engaged General Station for Geo-Environmental Monitoring of Guangdong Province (GSGEM) for a water monitoring study to comply with the new water regulations issued by the Ministry of Environmental Protection effective on June 1, 2011. GSGEM carried out the required study and prepared all reports required for compliance with new National Water Guidelines. The company completed the field work in January 2012 and received the comprehensive water monitoring report in April 2012. It concluded that the company is in compliance with the guidelines.

Revision of the EIA report has been completed incorporating results from the water monitoring report. The revised EIA will be submitted to Guangdong EPA as soon as they are accepting new EIA reports. The delay is due to the negative impact caused by the collapse of the tailing dam of an operating mine in Guangdong four years ago.