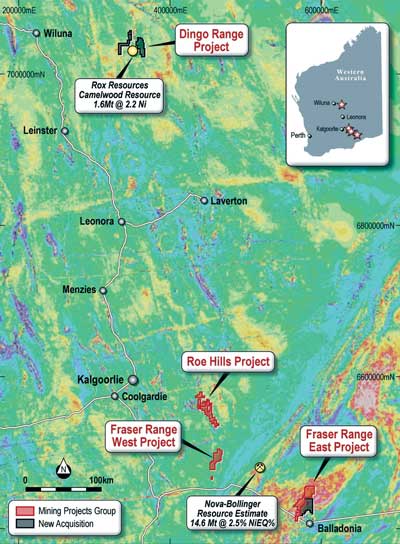 THE first stage Moving Loop Electro Magnetic Survey (MLEM) has been completed at Mining Project Group’s Fraser Range East project, southeast of Kalgoorlie in Western Australia. The MLEM program has been designed to test for the presence of bedrock conductors which may be associated with nickel mineralization in magnetic rocks paralleling the Camelwood/Musket Nickel trend.

Mining Projects has secured the services of Newexco Services to conduct geophysical and geological services. Newexco has remobilized its geophysical crew to Mining Projects’ Dingo Range Project near Wiluna, north of Fraser Range, where they have been undertaking a similar MLEM program.

Newexco is an independent specialist geophysical and geological consulting firm based in Perth. The company is headed up by Bill Amann and Adrian Black, who have had extensive involvement with several significant West Australian nickel discoveries. These include the Nova nickel sulphide deposit in 2012, the Spotted Quoll nickel deposit in 2007 and the Flying Fox nickel deposit in 2003.

Newexco has agreed to take an equity position in Mining Projects by providing geophysical and geological services in return for shares.

Following the first stage of the MLEM at Fraser Range East, soil samples were also taken at all stations to conduct Mobile Metal Ion (MMI) analysis, a form of low detection soil sampling. This form of sampling analyses the loosely bound ions attached to soil particles and allows for detection of geochemical signals through cover and transported overburden.

Newexco has received the geophysical data and MMI samples from the Fraser Range survey and is processing the data. The MMI samples have been sent to the laboratory for analysis and the results of the survey will be reported once Newexco have completed the processing. The same process will be followed for the Dingo Range survey.

Earlier this year Mining Projects Group executed an agreement to complete a major expansion of its Western Australian nickel assets. The company entered into a binding term sheet for acquisition of the Balladonia Tenement expanding its existing Fraser Range East project about 70km from the Nova-Bollinger Deposit and the Dingo Range Tenements bordering Rox Resources’ Mt Fisher Project. The agreement has also seen the company increase the interest in its existing Fraser Range East and West projects to 100%.

The transaction was conditional upon successful completion of a capital raising, due diligence and the engagement of Newexco Services. The company is also continuing to progress an agreement with the International Mining Inner Mongolia Geology & Minerals Group Co, a Chinese corporation, alongside discussions with other potential joint venture partners.