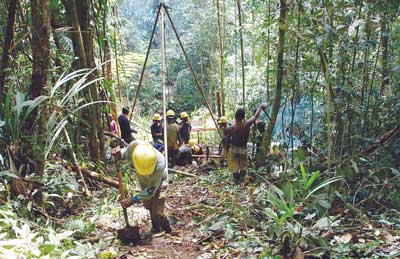 REGENCY Mines has applied for a nickel and gold exploration licence totalling 1284sqkm in eastern PNG. The Lake Trist project is 15km from the coast and 75km south of the major port city of Lae.

The area that Regency is seeking contains nickel laterite bearing ultramafics which host an historic inferred resource of 70 million tonnes @ 0.68% nickel. The resource was established by Bulolo Gold Dredging Co in the late 1950s and is therefore not compliant with modern standards.

Minor work carried out sporadically by other operators in the 1960s and 1970s presented nickel grades up to 1.68%. Only about 7% of the 35km by 10km potentially laterized target area appears to have been tested by previous explorers.

As well as the nickel potential, the western half of the Lake Trist project lies within the Wau-Bulolo goldfields, 15km east of the Hidden Valley Gold Mine of Newcrest and Harmony Gold, which annually produces 250,000 ounces.

Regency’s chairman Andrew Bell says, “Since Indonesia enforced a total ban on the export of unprocessed nickel products in January 2014, we have witnessed nickel prices increase by more than 40%. Asia’s major nickel consumers, who previously sourced up to half of their nickel from Indonesia, are competing to secure new supplies to cover the shortfall, and some have approached us. With no sign of Indonesia lifting the ban, we expect nickel prices to be strong for the foreseeable future.

“Lake Trist was an area we previously applied for, as the second applicant in line, since it may have potential for direct shipping ore. A renewed opportunity recently arose, and we acted promptly since we believed the time was opportune.

“Regency has also been actively engaging potential partners in relation to its 162 million tonne resource at Mambare and other nickel interests, and the Lake Trist opportunity would potentially add to the attraction of Regency’s nickel interests,” he says.

Regency’s associate company Ram Resources recently announced that it had acquired options on three tenements totalling 400sqkm in the southern area of the Fraser Range nickel-copper belt in Western Australia. The new tenements lie 2km west of the Crux anomaly being drilled by Sirius Resources, and are considered highly prospective by Ram management.

Andrew Bell says, “With this third group of tenements in the Fraser Range Ram is increasing its footprint and establishing its status as a significant and well-backed player in this exploration area. Sirius’ current focus near the new tenement boundary makes Ram a potential beneficiary of any exploration success Sirius may have there.”