THE countries with the top 10 mining exploration budgets in 2013 attracted a total of US$7.8 billion for all stages of gold, base metals, platinum group metals and uranium exploration, according to SNL Metals & Mining’s annual Corporate Exploration Strategies (CES) study. 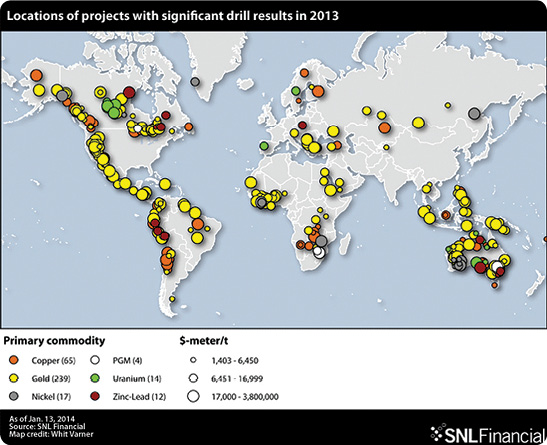 SNL Metals & Mining defines a significant drill result as an interval that adds resource potential to a project and exceeds a value threshold based on current commodity prices.

SNL says market uncertainty continues to weigh heavily on the industry in the early part of 2014. It says that without renewed investor interest in the coming months, the majority of junior companies and many small producers will have little choice but to further restrict their exploration efforts throughout the year.

As a result, SNL Metals & Mining expects the number of reported significant drill results to decline in 2014, particularly in countries with a strong junior mining presence, such as Canada and Australia.

Examining the 351 projects that reported at least one significant drill result in 2013, primary gold projects were the most active, followed distantly by copper, nickel, uranium, zinc-lead and PGM primary projects.

More than 55% of the projects were located in countries with the top three budgets - Australia had 90 projects, Canada had 76 and the United States had 29 - and the remainder was divided among 51 other countries.