CHINA is already Australia’s largest export destination, with goods worth $95 billion and services worth $7 billion provided to the Chinese market in 2013. Agricultural produce plays a major role and Australia’s export relationship with China was worth $9 billion to the agricultural sector in 2013-14. 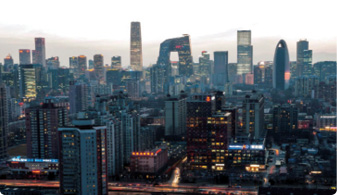 China is evolving into an economic powerhouse with cities like Beijing being prime examples of China’s new modern face.

The China Australia Free Trade Agreement (ChAFTA) is expected to have unprecedented benefits for Australian exporters, with former Australian Prime Minister Tony Abbott claiming that the agreement will bring billions to the economy and ‘drive higher living standards for Australians’.

The ChAFTA will be subject to an ongoing review process, with the first required within three years. This is expected to prompt further liberalization of trade with China. It includes a ‘Most favoured nation clause’, in respect of certain investment and services commitments, meaning that if agreements on more beneficial terms are subsequently offered by China to another country, those terms will apply to Australia as well. However, this clause does not apply to tariff levels.

The resources and energy sector is also a key ChAFTA component. Australia exported more than $90 billion of such products in 2013-2014. Almost 93% of these products will be duty free from entry into force and most remaining tariffs will be removed within four years. On full implementation of the agreement, 99.9% of these exports will enter into China duty free.

Austrade Beijing representative Appy Gao says considering the compatability and strong trade relationship between Australia and China it is very important that business is strengthened. Compatability already exists in resources supply but there is plenty of scope for Australian expertise to be used more in the continuing development of China’s mining industry, particularly in environmental initiatives and mine safety. “China’s mining machinery industry is already big but many manufacturers aren’t as smart or efficient as they can be, which is where Australia has a role to play.

“China’s central government has placed great emphasis on the internet of things and wants industry to use higher standards in going about business. Industry is also keen to upgrade by adapting smarter methods of increasing production while the mining industry is determined to improve efficiency. This process presents opportunities for Australia.

“ChAFTA is paramount for the relationship between Australia and China to continue to develop for the benefit of both countries. It is important for Australia’s manufacturers to grow exports to China and ChAFTA will facilitate this. It provides a platform for Australian companies to engage more with Chinese companies and also serves as a catalyst for conversation to take place.”