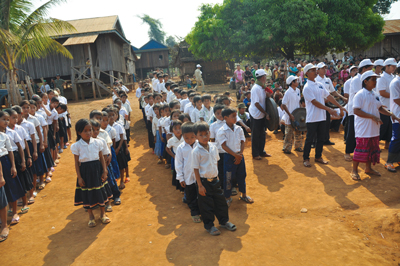 Education is a clear priority for Angkor Gold. Each academic semester 240 students are involved in programs assisted by the company.

BANTEAY, Cambodia: Accessing this village eight hours north of Phnom Penh is daunting on the best of days, not least during the rainy season. On the main artery from the capital, buses, cars and tractor-trailers alike can be seen moored in the mud, all resembling helplessly grounded ships. Another 30-minute ride can foil the hardiest off-road vehicle at the gruelling final stretch.

Visitors are greeted by barefoot children supervised by adults and elderly, listless and weathered far beyond their years amid thatched huts and stray, emaciated oxen. But beneath the surface, something remarkable is unfolding nearby a mid-sized copper-gold deposit: Canadian junior Angkor Gold Corp is fulfilling a Corporate Social Responsibility (CSR) mandate – one unprecedented for a miner its size in the region. Stakeholder engagement through Free Prior and Informed Consent (FPIC) blooms here near a rainforest clearing of peppercorn, cassava and cashew patches, and classrooms full of students.

A clean slate
History hasn’t been kind to Cambodia. Over the half decade ending in 1979, the Khmer Rouge purged the intellectual class while bringing the country to ‘zero’ for an agrarian-based communist society after a brutal US bombing campaign. In all, two million lives were lost as the world stood by in silence; memories of forced starvation, mass graves and unspeakable atrocities continue to elicit tears to this day.

But Cambodia has turned the page, with its emerging market economy and small-scale mining industry an open book. Early next year, Angkor and Mesco Gold Cambodia will begin operating one of the country’s newest commercial mines while establishing Phnom Penh’s first continuing royalty revenue stream from mining. “Geochemistry is compelling,” said Angkor’s CEO Mike Weeks. “There are unequivocal gold, copper and molybdenum anomalies.”

The ASEAN nation’s mineral prospects have across-the-board potential: Neighboring Laos enjoys 30% of foreign investment in mining while other small firms including Western Australia’s Renaissance Minerals, Geopacific Resources and Mekong Minerals of Queensland scour the countryside. Phnom Penh, meanwhile, is courting outside business while Angkor and its fellow Cambodia Association for Mining and Exploration Companies (CAMEC) members are helping the government re-draft its mining code.

“If we can help Cambodia make the industry attractive, it sends a message worldwide,” said Angkor’s vice president for CSR Delayne Weeks. “All stakeholders benefit – government, industry, communities and the environment.”

Angkor first arrived in 2009 with Joint Venture (JV) partner Perth-based Liberty Mining International and holds seven licences covering 1448sqkm, according to Mike Weeks. There have been sediment samplings and low-level aeromagnetic surveys, 18,700 drilled metres in 148 holes and trenches along with mapping of more than 20,000 soil and 55,000 termite mound samples over 85sqkm.

Most recently, Angkor analyzed more than 30,000 samples for two projects with Induced Polarization (IP) surveys, suggesting copper-molybdenum-porphyry with peripheral gold epithermal mineralization, added Mike Weeks. Propylitic-altered granite, granodiorite and clustered pyrite have also been found in veinlets and quartz; sulphidized andesite-diorite dikes and matrix pyrite with intruding granite have been discovered, too, and a new drilling campaign is pending early in 2015.

The CSR story
But what sets Angkor apart is a strict, company-wide sustainability ethos, unlike most any other miner its size throughout South East Asia. This is underscored, noted Delayne Weeks, by the fact that 50% of company shares are owned by its employees and close associates, including all management and board directors.

Many inside, and outside, the mining industry agree with the need for such an agenda. In 2011 and 2012, accounting advisory firm Ernst & Young ranked ‘maintaining a social licence to operate’ as one of the top risks facing the sector. This includes ‘strong partnerships with stakeholders and communities from the start so they understand every aspect of the project’. 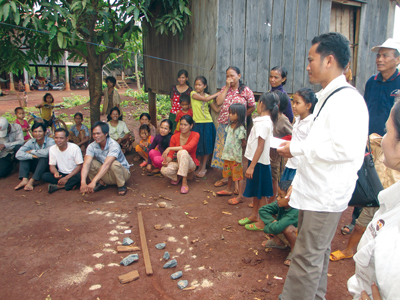 What sets Angkor apart from many other miners is a company-wide sustainability ethos.

Although CSR issues are often manipulated by corrupt governments to increase taxation or nationalize mines wholesale, Cambodian government senior minister Ly Thuch sees things differently, citing Angkor’s approach. “They always speak to the people and listen,” he said. “They follow through from A to Z – I’ve been consistently impressed; they have also met all local members of parliament and have relationships with local governments.”

Its technically-savvy, local staff, some currently training in GPS and GIS data mapping, on the other hand, are a particular source of company pride: Under the Khmer Rouge, Cambodia’s intellectual and political classes were eviscerated, yielding a generational legacy of unskilled workers.

In other ways, Angkor is going against the grain as well. For more than four decades, a wave of non-profits, aid workers and development assistance from around the world has poured into Cambodia to help its traumatized people back on their feet – but with decidedly mixed results. 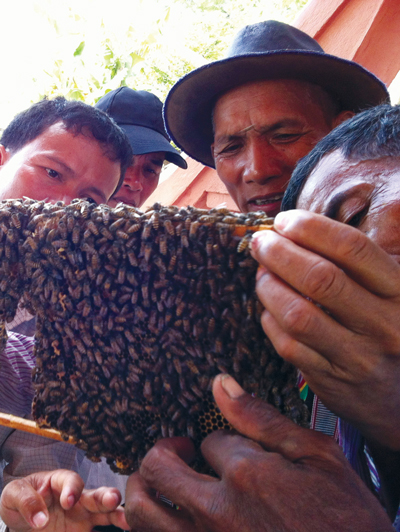 The NGO factor
Scandals are common, including an incident where employees of an internationally prominent anti-poverty NGO were caught breaking into a government office. A sizeable portion of well-salaried transient donor officials has imposed skyrocketing real estate costs on the capital and government officials blame the UN Transitional Authority for fueling the growth of its sex industry and HIV in the early 1990s.

Perhaps most damaging is the dependency these institutions have left behind – from abandoning them to just giving money away – along with blank stares in many villages. “Many NGOs have left a welfare mentality,” said Delayne Weeks. “It’s the right place at the right time, a simple opportunity to improve the lives of others and let them control their own destiny – to take ownership.”

One common problem for new mining companies is how their presence can hurt local food costs and public health. Angkor, however, is doing the opposite: through an agricultural pilot program in Banlung, its staff is helping farmers bolster productivity and income while helping them to feed their families; the company has also built a new clinic with medicine and health services for 20,000 in Talou, the first of its kind in the area.

Education is a clear priority, too. At a nearby farmhouse converted into a school, groups of 20 students learn skills at computer terminals donated by an Angkor Gold shareholder, with English lessons at a separate classroom. Altogether, 240 pupils participate each academic semester, with basic first aid and CPR included. Classes take place three times daily under the instruction of two teachers hired by Angkor Gold.

Angkor Gold employees further engage women in Phum Syarung by teaching sewing using some of the thousands of sample bags for exploration. In addition, the company is planning to provide education programs to promote understanding of the dangers posed by human trafficking – in an area of porous borders and criminal gangs catering to the region’s notorious sex industry.

Among the prime challenges facing sustainability-minded mining companies are social media networks which can spread disruptive protests like wildfire. In Angkor’s case, a Cambodian NGO armed with television crews seeking to cause trouble left empty-handed.

Cambodian national and Angkor employee Samath Ma offers all the explanation anyone could need. “This is my country,” he said. “I want to do everything I can to improve it, to make it better.”

Angkor is helping ensure locals have access to clean water to boost sanitation and good health in the area.

Free Prior and Informed Consent