This article examines a small but significant aspect of copper. This very important metal is one of the three which were the key to the development of man from the Stone Age to the industrial era. 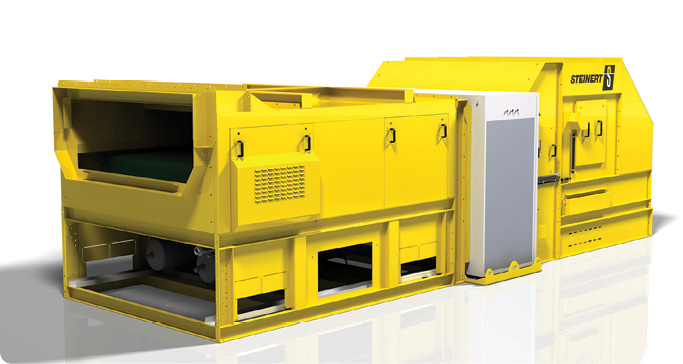 The STEINERT XSS is an example of how modern practices are used today to separate ore.

COPPER occurs in many forms throughout the world and has wide and varying applications; demand is still increasing and the current annual forecast is 17 million tonnes. It can be said that copper is the metal which formed the bridge between the Stone Age and the Metal Age.

The key in this proposition is the fact it is one of few metals which occurs in native form, and was the most useful to ancient man in that he was able to shape it into functional implements and weapons, as well as artefacts, coins and jewellery. A native metal is any metal found in nature in metallic form, either pure or as an alloy such as gold and silver, which were highly sought after for jewellery but of little practical use in those ancient times.

Copper occurs in many forms and in all parts of the world, mainly as oxides and sulphides, but it was in native form that it presented Stone Age man new material to work with, and it can be imagined that stone axes and hammers were used to fashion native copper into practical items for use and as adornments. The remains of some have been found in Egypt and are believed to date back to 3800 BC or earlier.

The evolution from the early use of native copper to knowledge of the benefits of alloying with other metals such as tin to form bronze, and from there to the production of metals, including iron from ore, was understandably slow, taking two or three millennia to the 16th Century AD when major advances in mining, ore beneficiation and extraction technology were made in Germany, Czech Republic, Slovakia, Britain and other parts of Europe.

Ancient man realized that native copper characteristics varied from place-to-place in terms of malleability or ease of shaping which we now know is due to the presence of small amounts of other elements such as tin and arsenic. They found that heating and then cooling the native copper changed the hardening caused by hammering – we now call this annealing which causes a change in crystal structure, restores ductility and allows shaping without breaking.

Ancient man would have found lumps of copper ore in various forms along with the native copper, many of which are highly attractive blues and greens as well as a myriad of other hues as copper oxides and tarnished copper sulphides. It is likely they would have been collected for making jewellery and as decorative pieces such as azurite and malachite.

It is speculated that in camp fires or accidental house fires where native copper and copper ore were present, ancient man would have observed in the ashes that changes had occurred - copper objects had altered shape due to melting and the copper ore had transformed to a metallic state due to the heat and the wood which would have formed a carboniferous atmosphere to convert the copper oxide to metal. These observers considered the effects and benefits of heat and fire, and then tried to re-produce the phenomenon. It can be said that they were the world’s first metallurgists as opposed to metal smiths.

During early trials to melt native copper to useable form, make alloys and convert ore to metal, the need for high temperatures was apparent, and they knew that forced draught, such as that used to fan the flames in cooking fires, was necessary. For efficiency a strong, continuous and directed supply of air was necessary and this led to the invention of bellows which were made from wood and animal skins and operated by hand, feet, levers and water-wheels. Bellows should be regarded as a very important invention in man’s journey from the Stone Age to the modern world.

The principles learned in producing copper were applied to iron ore and led to the Iron Age and the widespread use of this most useful metal.

Prior to smelting ore the early metallurgists would have removed or sorted waste rock by hand-picking using the weight and colour to identify the valuable mineral – the first form of pre-concentration. They also used the property of weight to sort ore by means of a primitive jig made from wood and mounted on a cradle to facilitate rocking – usually on the river bank or in a small stream. 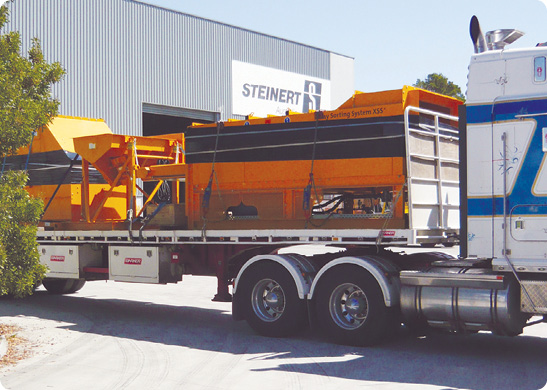 A STEINERT XSS en-route to the new owner of a copper application in northern Australia.

Copper deposits containing native metal together with oxide and sulphide ore are still mined today, and while it was most useful to ancient man it can be problematic in modern process plants in that at coarse sizes it is difficult to crush as it is malleable. In grinding it can form into thin flat pieces and report to tailings in any flotation circuit provided to float the copper ore.

Modern metallurgists, much the same as their ancient counterparts, have considered the problem and devised a number of solutions, including crushing with toothed rolls which shreds any coarse copper lumps rather than trying to break by impact; removal of the coarse lumps by gravity or ore sorting ahead of grinding; removal of fine native copper in the grinding circuits ahead of flotation by means of equipment such as spirals and shaking tables which use the specific gravity of copper to separate it from the rest of the waste and valuable minerals in the ore.

At STEINERT, engineers consider process requirements for the total ore and offer practical solutions which do not tailor the flow sheet to the equipment to development metallurgists. The composite Process Flow sheet illustrates how an ore containing coarse and fine native copper, copper ore and iron in the form of magnetite might be processed and is an example of how modern metallurgists utilize the properties of metals and minerals in the beneficiation process.

The recent demand and improved price for iron ore has made extraction of magnetite into saleable iron grade worthwhile, and the removal from copper flotation tailings by low intensity magnetic separators is practiced in a number of operations. 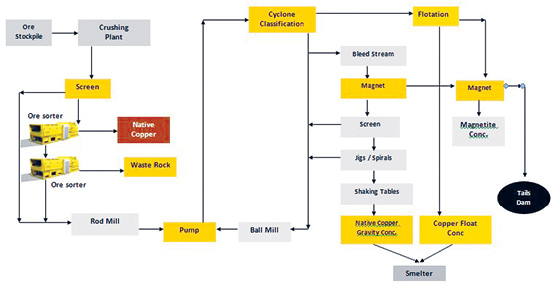 STEINERT has a strong presence wherever the need arises for intelligent technical separation solutions for the primary and secondary raw materials sector. Thanks to the application of an extremely wide spectrum of methods, ranging from sophisticated magnet technology to state-of-the-art sensors, customers receive materials in the purest form. Important resources are conserved as a result.

Founded in 1889, STEINERT has over time, become a leader in sensor sorting applications-systems based on induction, X-Ray and near infrared. Today, STEINERT is a full range industry supplier based on product range, expertise, and customer service.