NINE Volvo CE machines, including a specially adapted excavator, have helped a steel producer in Cilegon, Indonesia, recycle more than 97% of the waste material from its steel-making process. In the two years since the machines arrived, the customer is reporting excellent success.

Previously at the PT Krakatau POSCO plant in Cilegon, all waste materials produced as part of its 3 million tonne/annum steel production went to landfill. The situation was unsustainable from environmental and business standpoints as the huge volume of waste not only ended up as unnecessary landfill, but also contained material that was of value - if it could be sold on. 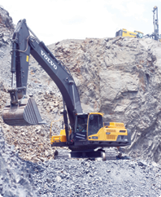 A Volvo EC 480D excavator is used at the PT Krakatau POSCO steel plant in Cilegon with a magnet attachment.

The company called in PT Korea Resources Recycling & Green (KRnG) to develop a solution to crush, separate and then recycle the waste sludge, dust and slag from its blast furnace. And PT KRnG called in Volvo CE to try and figure out what machinery could be used to handle the waste materials in this difficult application.

There were several specific requirements for the work, most importantly being able to keep machine operators at a safe distance from the molten waste, which can reach temperatures of 1600˚C. Another limitation was the very tight turning radius available for removing the waste from the furnace and transferring it to trucks.

Volvo CE’s team, together with local dealer PT Indotruck Utama, worked together to come up with an equipment mix that is delivering excellent results at the facility.

For the removal of molten waste from the furnace, a specially-adapted EC700CL was specified with an extended boom and a shovel attachment. This combination created sufficient distance between the operator’s cab and the molten waste, while the tracked unit with its 360˚ swing radius meant incoming trucks could be comfortably loaded within the tight space.

Edy Martanto, who has been operating the EC700CL for PT KRnG since it arrived at the job site almost two years ago, said the machine was performing exceptionally. “This is the most superior 70 tonne excavator I have ever operated. It is powerful and responsive – despite its size – and its ability to manoeuvre in tight spaces has helped us expedite the loading process on to the trucks. It also consumes an average of just 36 litres of fuel per hour which is great fuel efficiency.”

Despite the brutal work setting for the EC700CL its undercarriage, upper body and cab are all in excellent condition and it has racked up 3400 hours of operation.

Among the other Volvo CE machines at the site is an EC480DL with a magnet attachment which is used in the recycling process to remove steel particles from the waste for return to the steel mill. The remainder of the waste is ground into small particles and sold to concrete, asphalt and fertilizer producers.