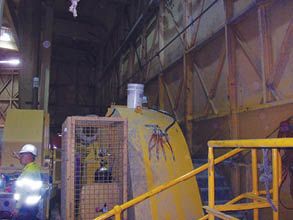 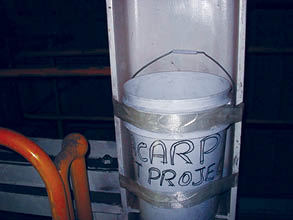 The three locations in which collection buckets were placed in a dragline machine house used to study the efficiency of an existing dust filtration system.

In recent years, concern has been raised by dragline operators that existing ventilation systems used on dragline machine houses are inefficient and inadequate at filtering dust from the outside environment. High dust levels within the machinery house have been known to cause problems with commutation and damage to electronics equipment. The longer term dust levels and effectiveness of the filtration systems have never before been measured and reported in any comprehensive or objective way which has led to a range of subjective opinions and beliefs within the mining industry as to which systems provide optimum performance.

Funded by ACARP, the Australian coal industry’s research program, BMT WBM has carried out a number of studies to address this issue. Bruce Manser, research project leader and engineer at BMT WBM, and Tony Egan, from ACARP, discuss the findings which have now provided a much more comprehensive understanding of dragline cooling and dust control issues. Both Bruce and Tony also highlight several design concepts involving alternative technologies which were investigated to determine whether or not dramatic improvements in overall dust filtration efficiencies could be made possible.

DRAGLINE ventilation systems are needed to provide cooling air to both machinery and operator while filtration systems are needed to ensure that that air is clean. Both systems are fundamental to the successful operation of a dragline. The effectiveness of the systems vary particularly in relation to their basic design and the level of maintenance/cleaning effort which mines are prepared to undertake. In addition to the requirement to supply clean air, a positive pressure differential must be maintained in the machine house to prevent dust from being drawn back in through the exhaust louvres.

The initial package of work undertaken by BMT WBM focused on how the air flowed through the machine house of a typical dragline, as well as investigating the air velocities around heat generating equipment and the effectiveness of the air in carrying heat away from that equipment. The study involved site work to measure airflows and temperatures, and computational fluid dynamics (CFD) simulations of the air flowing from the ventilation fans situated on the roof of the dragline, into the machine house, over and around gearboxes and the motor generator (MG) sets as well as through the electric motors on swing, hoist and drag.

There were two main challenges - ensuring that any dust collection and measurement activities did not have any adverse effects on the draglines or shovels during their operation was paramount, and establishing a simple but robust means of determining the overall dust collection efficiency of the filtration system on each machine tested. It was found early on in the study that measuring short term dust concentrations inside and outside the machine house was a very unreliable way of quantifying the overall dust collection efficiency of the filtration system. This particular challenge was overcome in what might be described as rather a low-tech but very logical way. Firstly, it was decided to measure exactly what the dragline operators were complaining about (the level of dust fallout both inside and outside the machine house) rather than the suspended dust concentrations and then compare the two dust fallout readings.

Even implementing that had its challenges, since natural wind gusts outside the machine house and gustiness inside the machine house caused by the ventilation system and windage from the drag and hoist drums tended to make it difficult to achieve consistent repeatable results under essentially similar situations. To effectively form a windbreak for the dust fallout gauges, large plastic buckets were secured to the dragline at the selected dust fallout sampling locations in such a way as not to become dislodged during normal machine movements. Each dust fallout gauge was a plastic jar which was held in place inside the plastic bucket by means of a flexible foam donut cut to shape. The jar was readily removable and replaceable with a new jar when the time came for the jars to be sent back to the researchers for analysis. An unexpected challenge early on with these ‘dust collection stations’ was to ensure that they weren’t mistaken for regular cleaning buckets and accidentally removed. To counter this, a number of signs were placed around the pails and a lot of adhesive used to prevent the buckets easily finding legs and walking off.

The large number of draglines and the one shovel covered under the study were spread across several mine sites and different operating companies. Also, since these were operational machines, down time was scarce and schedules had to be fitted in with. This meant that a large amount of coordination and flexibility on the part of the researchers was required during the initial setup of the dust samplers and a very significant amount of assistance was subsequently required from key mine staff to regularly collect the jars at the appropriate times and send them back for analysis. This challenge was overcome by liaising regularly with the key mine staff, who, without exception rendered the necessary assistance when and as requested so as to make the project a success.

The key finding of the program was confirmation of long-held suspicions that current systems are not adequately removing very fine dust from the outside air. This leads to dust accumulation within the machine house which subsequently leads to re-entrainment.

As to which of the two main filtration systems currently used on the draglines - Dynavane or Floseps - performs better, the view is that it was not possible to make a clear statement. This is because of the need to take into account the sensitivity of each system to blockage and its effect on airflow rate into the machine house. However, both systems are susceptible to dramatically reduced filtration performance once blockage occurs.

Moths were identified as a major problem. They clogged up intake screens and scavenge systems on the filtration units and reduced their performance. Some practical means of addressing this include not positioning lighting too close to the intakes of the filtration units because it attracts the moths and, when modifying ventilation systems, maintainers should make the intake screens as large as possible so the moths can’t get trapped so easily onto the screen mesh.

Several alternative concepts were investigated to determine whether technologies existed that could be readily incorporated into a dragline ventilation system in order to secure enhanced efficiencies. Such technologies included acoustic agglomeration, cyclone designs, traditional baghouses and cartridge filter based technology. The latter ultimately became the preferred option of the researchers, after seeing the filtration results from an electric rope shovel which was part of the studied group of machines that had a small cartridge filter based system installed. To be viable on a dragline, it was felt that the normal operational pressure drop across the filters would need to be decreased somewhat from standard cartridge filter design practice, so as to bring the fan power consumption requirements within acceptable limits.

The more recent study moved on to identifying whether an alternative cartridge filter design with improved flow and pressure drop characteristics, compared to those normally used in the P&H AirScrubPro™ system, could be developed and then tested on an operating shovel. On completion of the first stage of laboratory testing, it became evident that a significant reduction in pressure drop across a clean filter was unlikely to be realzed by attempting to develop an alternative filter cartridge design. The focus of the study moved away from the manufacture and testing of an alternative cartridge filter design to the field testing of the cartridge filters used in a standard AirScrubPro system to establish how quickly the pressure drop across the filter changed with time as the filter elements tended to clog up with dust.
Perhaps the biggest surprise of the study was to find how much appearances can influence perceptions. One of the older machines that was deemed by mine staff to be one of the worst performers was found from early testing to indeed be the worst (only about 70% dust collection efficiency compared to more like 75% to 85% for the other draglines; but when the filtration system was completely cleaned it became the best performer across all of the draglines being tested (about 95% overall dust collection efficiency - only the shovel with the cartridge based system performed better, about 98% to 99% overall dust collection efficiency), yet only the researchers noticed the change.

The projects have provided the Australian coal industry with a better understanding of dragline cooling and dust control issues and further provided operators with tools to assess the potential for improving the situation on a particular machine experiencing cooling or dust issues. This has particular relevance for operators planning an overhaul or replacement of the ventilation system on a dragline in order to get the most benefit from the works.