The potential of ‘big data’ in mining 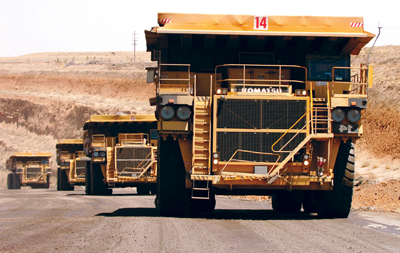 The application of ‘big data’ can help mine operators improve productivity.

IN the future, people will look back at the last decade of the 20th century and the first decade of the 21st as being the genesis of ‘big data’. With the birth of the Internet, wireless networking, and the ever-decreasing cost of digital storage, capturing and storing huge amounts of data has become the rule rather than the exception. Along with the development of the Internet, IP networking has made even more data possible as devices never even dreamt of years ago can now be easily connected.

Who would have thought 20 years ago there would be a time where we could go for a run and instantly know how far we’ve gone, where we’ve gone on a map, the calories burnt and altitude gained, all read from a crystal clear screen on a mobile phone not much bigger than your average wallet.

There has been a similar explosion of ‘big data’ in mining, albeit slightly behind that of the Internet revolution, but nonetheless, the amount of data now available from mining equipment is staggering. In fact, there is so much data available people often don’t know which way to turn.

Information overload is not a new term, but its use in the past decade has increased dramatically as the amount of data that fills digital storage grows. Collecting data is one thing; displaying it meaningfully is another. Several large mining companies have attempted to quell the information overload problem through the use of remote operations centres (ROC) where relevant information from operations thousands of kilometres away is displayed for management review. For other companies where an ROC is not on the agenda, the challenge of disseminating and displaying vital information remains.

In order to show the challenge of ‘big data’, let’s take a specific example and break it down. In open pit mining, seconds are paramount. Whilst seconds may not play a large part in drill and blast (its generally all about metres), in the load and haul cycle a matter of seconds can make or break a production target. Before my current role I was more familiar with underground mining where metres were king. ‘Metres advanced’ is the metric used in underground development. I never really gave much thought to how much emphasis is given to seconds above the ground but it soon becomes obvious when you break it down. Haul cycles are made up of simple segments: travelling, spotting, loading and hauling (there are other segments like waiting and tipping that can be added but we’ll keep it simple for now).

One haul cycle is the total of these activities in minutes and seconds. Each of these activities can be timed individually using a variety of methods. For most operations, a fleet management system that can detect when each of these activities ends and the next starts can provide this information. For example, when a haul truck is moving along a haul road without a load, it is travelling. When full on the same road, it is hauling. The system knows this based on the GPS position of the truck and if it has a load or not. For spotting, the GPS position is used but it also correlates this with the proximity of a load unit and the selection of reverse gear. If all these are true, then the truck must be spotting. Now that we have a way of breaking the activities down, we also have a way of determining the total cycle time. Likewise, as the activities can be captured individually, we can now also display these individually in a variety of formats such as static reports or dynamic dashboards.

So where do the seconds count? Let’s say a haul cycle is 20 minutes in total and consists of the following breakdown:

Now we have a baseline that we can compare all other data in order to answer questions such as:

There are many answers to these questions, but they all have one thing in common: only data can provide objective answers. Let’s tackle the first and third questions – by measuring all operators it will soon become apparent whether 20 minutes is good and where the operator sits in the scale of things. Once you have the answer to those questions you can then answer question number two. If the average is in fact 18 minutes, this operator is well below. Why? Again data can provide the answer, or at least point you in the right direction.

And this is where data can also lead you on a wild goose chase. Having only one source of data may not tell you the full story. What if the reason this haul was 20 minutes was because a shower of rain caused a portion of the haul road to become slippery. This would only be apparent on one or two hauls as the road would soon drain and dry out, creating a temporary increase in the overall total time. The moral of this example is don’t get too wrapped up in the data you fail to see the ‘truth’.

Let’s go back to question two, as this is where we can really show the power of data. Once the data has been verified, we can focus on the cost savings to be had from reducing the cycle time.

This is where engineering and technology can come together to show the potential benefits of ‘big data’. Let’s target a one minute improvement on the cycle time to keep things simple. As the current cycle time is 20 minutes, three cycles are possible in one hour, therefore there is a three minute saving every hour. In a 12-hour shift there is usually 10 effective hours on average, so therefore with one truck across one shift there is 30 minutes extra – more than enough time for an extra load. Now lets extrapolate that across a fleet of 50 trucks for the year - 1 extra load x 50 trucks x 2 shifts x 365 days = 36,500 extra loads for the year.

Now let’s work out the potential value of these extra loads. We’ll use best case, round figures to make it easy, but you’ll soon see what a one minute saving each load can add up to.

I did say this was best case – this certainly wouldn’t be the case in the real world as each load isn’t always a premium grade load as there is waste that needs to be moved. There’s a whole host of other factors that would affect the above equation, but it shows the potential of what can be achieved by using ‘big data’.

Now that we’ve seen what ‘big data’ can do for us, the challenge is sharing this information with those decision makers that value the data. For a production engineer, giving him an extra load per hour is like having another truck in the fleet – something that can’t be physically achieved with spending many millions of dollars. But give it to him for free and he’ll be your next best friend. And this precisely is the future challenge facing many – how to capture, interpret and display big data in this age of information overload. That sounds like a great topic for another article.

Jason Nitz is Fleet Management Superintendent at Newmont Boddington Gold in WA, Australia. He holds a Master in Mining Engineering and Graduate Diploma in Mining and is responsible for Boddington’s operational technology and reporting across the mining fleet.