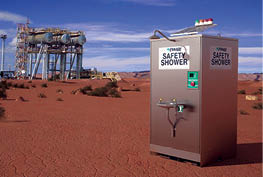 Enware Australia will supply safety showers to a bauxite project in Saudi Arabia.

SUPPLIER of stainless steel emergency safety showers, Enware Australia, has made its largest export delivery to date, to the $US10.8 billion Ma’aden aluminium complex in Saudi Arabia. Enware has delivered more than 700 of its Australian designed and manufactured emergency safety showers along with associated safety equipment to Korean based design, construct and engineering company Hyundai for Ma’aden’s joint venture with Alcoa.

The tough, reliable and technically advanced Enware safety equipment will be used at diverse locations throughout the Ma’aden project, which will use Saudi Arabia’s bauxite resources to produce aluminium for domestic and international markets as well as to facilitate the development of domestic downstream industries in the Kingdom. Ma’aden envisages bauxite production at an annual rate of 4 million tonnes.

Enware Australia managing director Adam Degnan says the supply of the custom-designed safety technology to Hyundai is a wonderful vote of confidence that could lead to further export opportunities for Enware, which is already the largest manufacturer of stainless steel safety showers in Australia and exports to 15 countries.

“Gaining recognition and accolades from a company such as Hyundai has already seen us receive an order from another company for identical safety systems for a similar refinery in the Middle East. We have also seen an increase in request for tenders for overseas projects.

“However, probably the most pleasing aspect is that Hyundai has contacted us with the possibility of involvement in two further projects under consideration in the Middle East.” Enware has won design awards in Australia and overseas for its specialist plumbing and stainless steel safety products. It has a strong network throughout Australia and New Zealand and has established offices in Singapore to grow exports to that country as well as to Malaysia, Indonesia, Hong Kong and Thailand, while also opening a base in Dubai to serve rapidly growing markets in India and the Middle East.

Adam Degnan says the project was enormously valuable to Enware because of the number of challenges the company successfully met in all areas of its operation, including manufacturing administrative, engineering, logistics and R&D.

“Dealing efficiently and responsively with a company the size and scope of Hyundai in itself threw up many challenges in the transfer of information between us and the refinery operators via Hyundai. The project was very fluid in that there were a large number of design changes during manufacture which necessitated enormous flexibility on our part to ensure the systems still met required standards. The end result was specifically designed emergency systems for the project.

“The timeline of 15 months from the signing of the contract to final delivery was made even tougher as during the process the number of systems required increased several times, which in turn increased the pressure on component suppliers and our manufacturing facility to meet the deadline.

“The changes in design and quantities caused us to investigate all avenues of production, leading to a more streamlined manufacturing process and management of our staff to ensure they were able to perform at an optimum level without any detriment to their health. These changes are in place permanently and have led to better all-round production which is a great testament to the teamwork within the company.”