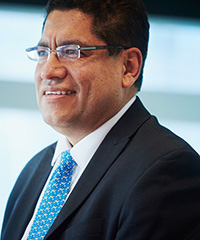 Mr Basto will be part of BHP’s Executive Leadership Team and responsible for BHP’s iron ore and nickel operations in Western Australia, metallurgical and energy coal in Queensland and New South Wales, and copper in South Australia.

Mr Basto has been the acting president operations Minerals Australia since Mr Henry was announced as CEO in November 2019. From 2016 to 2019, Mr Basto was Asset President Western Australia Iron Ore (WAIO).

BHP’s Australian minerals business has a workforce of more than 40,000 people, annual EBITDA of approximately US$16 billion, and last financial year contributed nearly US$30 billion to the Australian economy.

Mr Henry said: “Edgar’s leadership and experience will make BHP’s Australian minerals operations safer, lower cost, more productive and more reliable. He is passionate about the role we play in communities and the responsibility we have to those who both rely on and support BHP to create social value through our activities.”

Originally from Colombia, Mr Basto has a Bachelor of Applied Science (Metallurgical Engineering) from the Universidad Industrial de Santander. He joined BHP in 1989, and held senior operational roles in Colombia and Peru.

Mr Basto moved to Melbourne in 2006 as BHP’s global head of health, safety and environment. From 2009 to 2015, he was based in Chile as BHP’s Chief Operating Oicer Base Metals and then Asset President Escondida – the world’s largest copper mine – a role he held for five of those years.

Mr Basto has been based in Perth since 2016, and was president of the Chamber of Minerals and Energy of Western Australia for two years between 2018 and 2020.