SILVER City Minerals has started an exploration program specifically targeting lithium hosted in pegmatites at Broken Hill in the far west of New South Wales. The purpose of the program is to locate pegmatites which contain lithium minerals with a particular emphasis on spodumene, the dominant commercial lithium mineral. 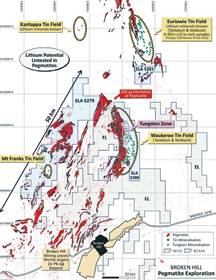 The company considers that, through systematic sampling and mineralogical studies, potential for discovery of lithium minerals at Waukeroo and elsewhere in the district is high. Work has commenced with field teams sampling and mapping, including re-sampling of drill chips from the previous tungsten resource drilling. Sampling has also been initiated in areas of the Western zone where extensive pegmatite outcrops have similarly never been assessed for lithium.

A study using an existing airborne hyperspectral (HyMap) survey is under way to assess the potential for remotely differentiating spodumene in the spectral data.

At Stephens Trig the company has commenced a program to test the extent and tenor of zinc-lead mineralisation outlined in one hole with a step-out hole located about 60 metres to the southwest. At Yalcowinna West the company will drill beneath a rotary airblast (RAB) geochemical anomaly 400 metres-long beneath alluvial cover. RAB drilling returned spot values to 0.26% zinc.