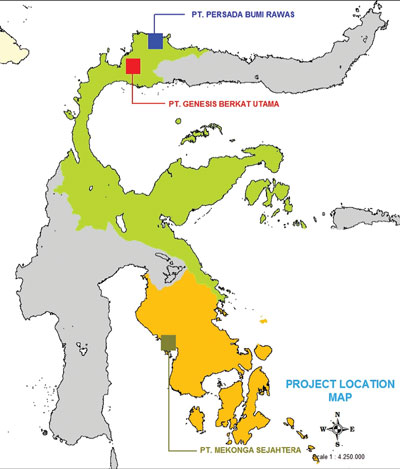 The Tamboli project of Western Mining’s subsidiary PT Mekonnga Sejahtera is in southeast Sulawesi. The company has other prospects in the island’s north.

The outstanding assay results combined with superior location and infrastructure confirm that the Tamboli project could become the lowest cost graphite producer in the world. The exploration is conducted by Western Mining’s Indonesian subsidiary PT Mekonnga Sejahtera.

Western Mining Network has completed the transaction to acquire options to purchase up to 75% of PT Mekonnga Sejahtera and 99% of PT Eagle Rich Nusantara, giving it access to 98.04 hectares of Mekongga’s graphite tenement at Tamboli, in the Kolaka region, as well as the graphite beneficiation and industrial estate establishments.

There were 15 diamond core holes drilled at a 50 metre to 100 metre spacing and depths ranging from 10 metres to 100 metres per hole. Initial assays from three holes have been received and other cores are still in process.

The weighted average total graphitic carbon (TGC) of the first hole is 21.27%, the second hole is 14.67% and 14.54% for the third. The highest intersection grade was 32.44% with the TGC obtained from the first hole at 2.6 metre depth from surface.

A maiden JORC-compliant resource is now being compiled and will be finalized after all assays are received from the remaining holes. The assays were supervised by PT IOL, the subsidiary of Bureau Veritas in Indonesia.

Western Mining Network recently signed a Heads of Agreement with a consortium of three Korean companies to fast track development of the Tamboli project. The consortium consists of Udin

Udin and E-Petro, both based in Seoul, Korea, possess experience and capabilities to beneficiate and process raw graphite ore into a high purity level of graphite carbon powder. They are experienced in the design, construction and operation of beneficiation plants for graphite. The plant will be at Western’s property, adjacent to the proposed mine site.