THE initial exploration drilling program at Chinalco Yunnan Copper Resources Limited’s (CYU) Millenium prospect in northwest Queensland has achieved results that are beyond company expectations. The program has identified a new and potentially large mineralized system at Millenium with significant grades of copper, cobalt and gold intersected. 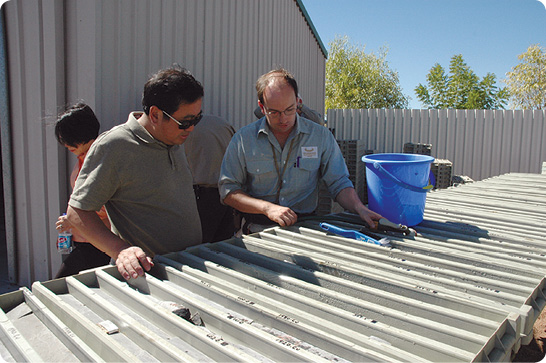 Examining core at Chinalco Yunnan Copper Resources’ yard in Mt Isa, northwest Queensland.
On September 17, 2013, CYU announced that it had entered into a farm-in agreement with Elementos Ltd providing CYU with the right to explore for copper, gold and other minerals and ultimately earn a majority interest in the Millenium project. Millenium, situated near Cloncurry in the world-class Mt Isa Inlier, includes several mining leases which cover an area totalling 134 hectares.

The initial exploration program involved the drilling of 13 reverse circulation (RC) drill holes designed to validate historic drill results from the 1970s and early 1980s. As a result of this program CYU has identified a large mineralized system with a strike length of 1200m which is still open both to the north and south. In addition, because the drill holes in this program were shallow (up to 150 metres in depth), the mineralization remains open at depth.

CYU’s managing director Paul Williams says that the initial exploration program at Millenium was an excellent start to activities in the region. “After a full analysis of the results from the initial exploration program by our Mt Isa-based exploration team, it is likely that next year CYU will continue to develop its knowledge of this project with drilling likely to extend further to the west (with deeper drill holes), infill drilling between the existing drill hole locations, and drilling to test the mineralization strike length along the potential 10km zone that lies within the CYU tenure package.”